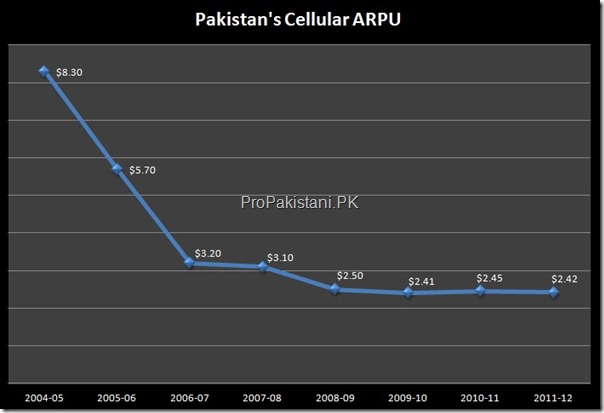 Growth in number of subscribers and Average Revenue per User (ARPU) are indicators of how fast telecom revenues are growing in a market relative to subscribers. In Pakistan, like most emerging markets, the subscriber base grew exponentially however the revenues of telecom operators didn’t go up in same proportion. Keep reading to know why!

Pakistan’s telecom market, in past 4-5 years at least, is largely relying on subscribers’ growth to stretch its revenues. Despite all the efforts the situation isn’t very pleasing for the investors as far as returns and profits are concerned, amid depleting value of Pakistani currency, worsening ARPU and tough economic conditions on top of energy crisis.

Naturally, the subscribers’ growth has been arrested in recent past due to attainment of sufficient saturation, which leaves operators with not many new sales (as compared to yester years). ARPU on the other hand was never worked upon by the operators and hence the growth in revenues is in shackles. Double figure growth in operators’ profit has become a rare scene to witness.

This is no rocket-science for anyone to understand that ARPU (Average Revenue Per User) in Pakistan’s telecom market (cellular market to be more specific) has crossed the bread limits to hit new lows in the region.

Clearly the ARPU has dropped from whopping USD 8.30 in 2004-05 to USD 2.42 in 2011-12, which is expected to go only downwards in future if current market dynamics remain consistent.

There are mainly five factors that have impacted cellular ARPUs:

Market Size and its Impact on ARPUs:

Biggest culprit, for industry’s down fall, is usually the regulator. Who, in regular circumstances, is suppose to envision the on-going dynamics to determine the flaws and then shapes the future by properly regulating the laws and procedures.

Pakistan Telecommunication Authority, arguably, sold too many licenses in a market which had not enough juice to make all players contented. Let me quote Mr. Walid Irshaid, CEO and President of PTCL, as saying following in October 2011:

Pakistan cellular rates are the cheapest in the world. This can’t continue. This market has to consolidate, otherwise this will be a losing proposition for every operator.

Mr. Irshaid wasn’t the first and only top official from industry to express such feelings. There were more voices echoing the same dilemma. In an interview from 2010, Rashid Khan, CEO of Mobilink was asked following question:

A: Do you think the consolidation is inevitable?

Rashid Khan: We believe that there are too many players. Based on the low prices and high operating expenses, it’s a natural evolution.

In 2010-11 there were efforts made for the consolidation in market, which didn’t go through due to falling stock values of cellular companies and rationally high demands from exiting operators. In short, the idea of consolidation didn’t work and market remains with 5 operators with Instaphone becoming the target of cruel economics.

I am not trying to be skeptical, but these statements from top industry officials raise a serious question on government’s decision of bringing six players into Pakistani telecom market. If so, who is to be held responsible? and how to reverse this remains a question mark?

Pakistan Telecommunication Authority relies on Significant Market Player (SMP) rule to regulate tariffs. Regulator claims to have kept a watch on SMP’s pricing to make sure that tariffs in cellular market remains balanced. Otherwise regulator doesn’t interfere at all in pricing of cellular plans.

This rule of SMP is still in practice when practically all operators are catching up the SMP (Mobilink in this case) in terms of subscribers’ market share. See below market-share chart for illustration: 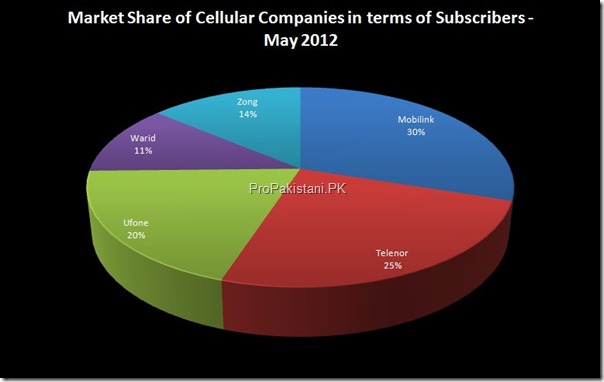 Even worse, the provision of regulating SMP’s tariff also remains a question mark. Mobilink rarely asks for PTA’s prior approval before launching any offer.

Currently, the market is moving without any sort of cap on pricing. Every operator is free to set prices of its comfort and will.

Pakistan Telecommunication Authority needs to revisit the cellular policy, which is by the way expired and must be appended to meet ever-changing market needs of today.

Unequal Focus From Operators on Sales Only

Sales has remained the major, if not the only, gauge of success for Pakistani telecom operators and regulator. Cellular operators vigorously added the customers to their base, without considering any other business factor. For this, they went to any and every level to bring new customers. Read this article to know a little about cellular companies’ act of selling SIMs through every possible channel, for which they not only compromised with their futures but also our national security was put on risk.

In this race for acquisition of new customers, the subscriber retention was largely over looked that resulted into lower ARPU.

All above factors forced customers to have multiple SIMs. Imagine a customer who has a spending power of Rs. 500 on communication services and he has (let’s suppose) four SIMs in total – that are used for different packages, networks. In such situation he’s translating into ARPU of Rs. 125 per SIM, instead of ideally an ARPU of Rs. 500 per subscriber.

Industry ARPU has been hurt by this phenomenon a lot. Customers often tend to have more than one cellular SIMs, impacting the over all industry ARPU.

In 2008, when CMPak started its operations in Pakistan under the brand name of Zong, cellular ARPU was hovering around USD 3 or above. However, soon after Zong came into play it relied on pricing to compete with humongous rival operators having over 15-20 million customers and network reach of thousands of towns in the country.

Naturally, Zong had no other way to survive but to push the prices further down to beat the competition. Older operators, on the other hand, instead of capitalizing their coverage, subscribers and service advantage, started competing with Zong.

Low-paying, and hard to retain, customer from market rushed fast to Zong due to low pricing strategy. However, company struggled with retaining customers amid coverage and service issues. This all resulted into a situation where Zong had no high-end customer and it had to keep relying on low-pricing to meet its revenue targets.

Just to mention here, Zong has around 15,000 postpaid customers out of its total 17 million subscriber base, which is way below the industry standards. In addition, Zong’s ARPU is around Rs. 156 (confirmed reliably through sources) compared to average ARPU of Rs. 230 for other four operators in Pakistan (i.e. Mobilink, Telenor, Ufone, Warid).

Current market dynamics suggest that Zong will keep struggling with customer retention and hence it will further lower the prices to gain its share of revenue. Which is a short-sighted strategy that will not only de-value Zong as a brand but will damage the whole market.

Pakistan, which is standing at the verge of 3G spectrum auction, can not afford this to continue. Regulator and cellular operators need to revisit their policies if they really want telecoms businesses to keep running in the long run to keep supporting the national economy and hundred of thousands of families associated with this business.

At this point of time we are pretty much determined about the factors that played part in lowering ARPUs, in next part of this multi-part post, we will try to calculate the impact of ARPU on Pakistan’s economy in general and on telecom industry in specific. Keep watching this space for more on this.