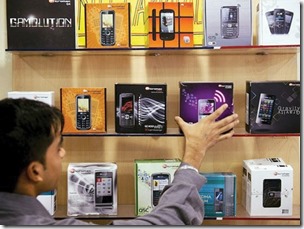 Pakistan has reportedly imported mobile phone of around Rs. 15.77 billion during July-September 2012, up from Rs. 14.25 billion during the same period last year, showing a growth rate in imports of around 11 percent.

According to Federal Bureau of Statistics, mobile phones of Rs. 5.50 billion were imported in September 2012 only, up from Rs. 5.30 billion in August 2012.

Market sources said that trend of importing high-end Smartphones is increasing which is consistently adding burden on our national import bill. Furthermore the market believes that Chinese Mobile Phones still lead when it comes to the market-share of of mobile phone handsets.

Overall spending on imports for all telecom equipment stood at Rs. 34.31 billion during three months from July to September 2012.