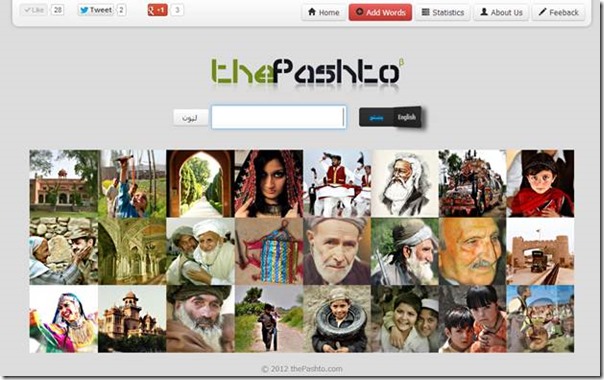 Pashto is the language of Pashtuns / Pakhtuns / Pathans. They are, historically, inhabited mainly in Khyber Pakhtunkhwa, Afghanistan, and Balochistan. Population of this language speakers is estimated around 30 millions.

Based on Fairly reliable sources, 52.9% population speak Pashto in Afghanistan and 16% inhabitants in Pakistan speak Pashto. Based on a theory that attributes Pashuns to Israelite origin, Pashto had been considered a language of Semitic group. That theory is recorded in great details in Makhzan-i-Afghani, a book written by Niamatulla Herawi in the 11th Hijri century (17th A.D.) and is widely used as a reference source by Afghan scholars and non-Afghan orientalists in favor of the Israelite theory of Pashtuns.

At the early nineteenth century, when European scholars became interested in Pashtuns’ origin, some accepted the Israelite theory, but others deemed the theory wrong and called Pushtuns to be Ariyans. (Sir William Jones, Alexander Burnes, William Moorcroft subscribe to the Israelite theory. On the other hand, Mountstuart Elphinston, John Malcolm, Bernard Doren, and James Darmsteter believe in Ariyan origin of Pashtuns.) Scholars favoring the Israelitic theory, believe that Pashto is like Arabic and Hebrew a Semitic language. On the other hand, those who accept the Ariyan origin of Pahtuns, relate Pashtu to Indo-European language group.

Now-a-day, there are a lot of people who are learning how to read, write and speak Pashto, including Pashtuns and Non-Pashtuns. There are many reasons for it, trends of Localization in this modern era, Cultural Interests, competition exams (CSS, PCS etc) and jobs in Social development sector (NGOs) brought people towards seeking for the resources of Pashto language.

Another recent reason was when army operations started against militant groups and foreigners entered into Pashtun areas. Therefore all these were the factors due to them the modern Pashtun intellectuals felt a dire need to provide Pashto language resources in easy and organized way.

thePashto.com is basically an online dictionary (Pashto-English & English-Pashto) and a very good effort for the people who want to improve their Pashto vocabulary and the language skills. Although this dictionary contains more than 15K words including auto-suggestion option and colorful grammatical description of the required word too yet its navigation is clear, all pages are lightweight and load quickly. For every single word, you may get 3 to 6 meanings. This website produces good visual impression for the users.

It appeals to the average person because the layout is simply designed but feels comfortable to the eyes of the viewers. The design has been made very much professionally. Everyone who is user of this online dictionary feels as if one is in good hands and knows that one will be able to find the meaning of every required word in this Pashto language resource.

Talking about another prominent feature of this dictionary, it contains the option of words addition by the users. For the said purpose, keyboard has already been installed with Pashto supported format. Anyone may add words to the dictionary very easily. Just visit the website, first try to find your desired word either in Pashto or in English, if it is not present, then you need to register on the site once only by filling a few basic pieces of information about you. After you get registered, now you may start submission of the Pashto-English words in the database portfolio of the website. This proves that the said dictionary will be improved more and more with the passage of time.

These are the few but unique options which make this a best available Pashto language dictionary on internet world.