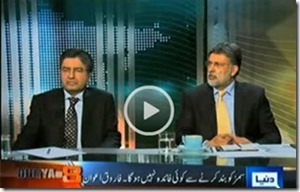 Mr. Farooq Awan said this in a talk show on Dunya TV.

Mr. Awan’s statement has come just a week after the MNP services were banned in Pakistan for security reasons.

According to Chairman PTA the MNP customers are most identifiable because they go through all the (manual) checks and clearance before switching their mobile network. It merits mentioning here that MNP customers must be given (manual) clearance by the operator for porting out of a network.

Chairman further commented that MNP customers are usually the most loyal and high revenue generating customers for the mobile operators, because such users tend to keep using their numbers for long with high consumption of services.

It maybe recalled that MNP is considered as a landmark achievement for Pakistani Telecom Industry, which not only successfully implemented the service before anyone in the region but also ported at least 25 million customers from one network to the other using the service (till it was banned a week ago).

Ban on MNP along with other measures, to curb illegal sale of SIMs, are taken by the government to tackle terrorism in the country. However, chairman’s statement on MNP is a clear indication that recent directives were issued in a hurry without considering the long-term impact on industry and economy.

Chairman PTA, in the talkshow, committed that authority will re-consider its directives after consultation with the industry. We are told that a meeting of high-ups at celcos and authority is scheduled today to discuss the situation.

Analysts opine that PTA should have considered consulting with the industry prior to issuing the directives and embarrassing the country in international media, at a time when Pakistan is undergoing serious reputation issues.

This is exactly what PTA did while banning the list of words for text messages. Its negligence and lack of homework had caused immense embarrassment to the country in local and international media.