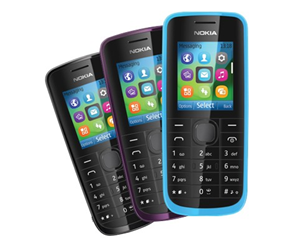 After consecutive launches of low-end handsets by Nokia, the new addition in the line is Nokia 114 (a dual SIM handset).

It is said to be the sibling device for Nokia 112, due to its pretty similar features and foreseen price tag.

Based on Nokia Series 40 platform, this handset is embedded with internal memory of 16 MB and the mass memory of 64 MB. The highlighted feature of this handset is its dual-SIM capabilities and GSM radios. The handset also supports a microSD card with a capacity of up to 32 GB.

Nokia has designed this low end handset with instant messaging services including Twitter, Facebook chat, Windows Live Messenger, Nokia Chat and a few Java games. Moreover, it comes with Easy Swap feature to switch between the two SIM cards without much difficulty. Further, the handset is preloaded with Nokia Xpress Browser that enables for 90% faster browsing experience

Being an Internet-centric handset, Nokia packed this device with connectivity features including Bluetooth 2.1, GPRS and EDGE.

On camera front, it has a 0.3 megapixel VGA camera that can capture images of up to 640 x 480 pixels with QCIF video. The camera features a 4x digital zoom and the aperture found here is f/2.4.

However, Nokia is promising the battery capacity of 1,020 mAh offering up to 10.5 hours talk time and 637 hours standby time.

So far, there is no word on the pricing of the handset but Nokia stated that more details regarding the pricing and regional availability would be disclosed in the near future.