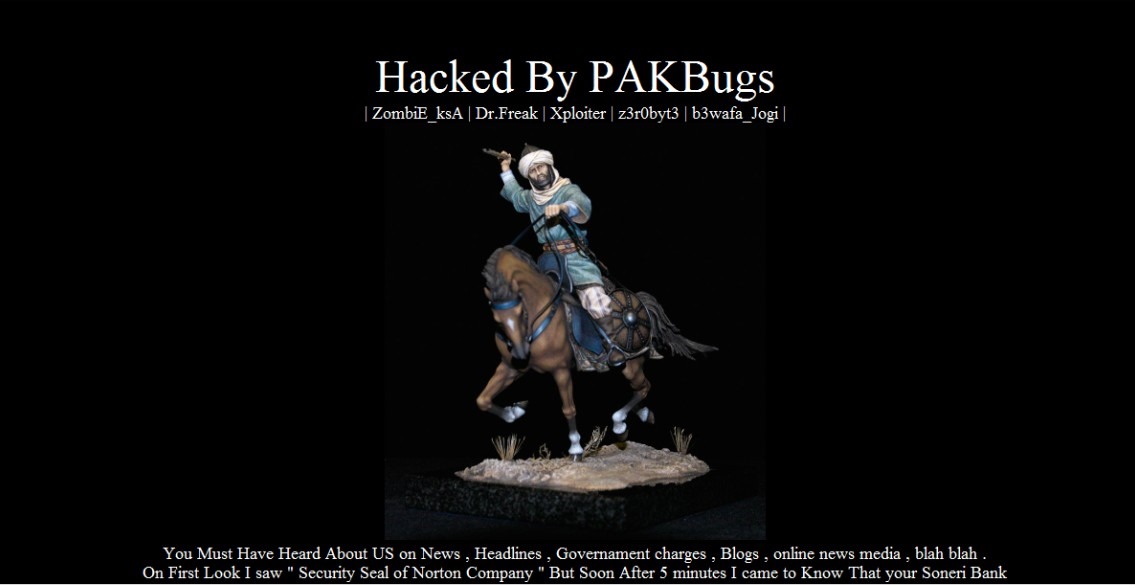 Initially the Soneri website – which manages the online banking system of Soneri customers – was hacked by Pakbugs yesterday night. Later, Pak Cyber Army re-hacked the website and defaced the same page with their own message.

It is still unclear if customers’ data was compromised or not or if the online accounts were impacted by hackers. 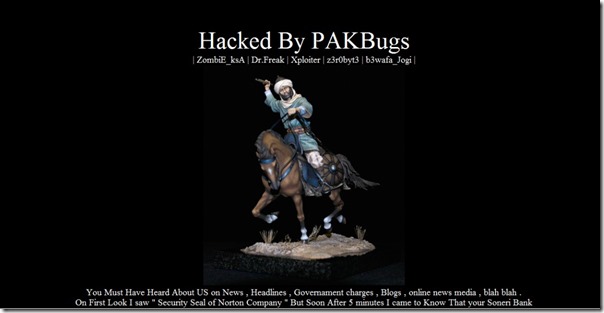 You Must Have Heard About US on News , Headlines , Governament charges , Blogs , online news media , blah blah . On First Look I saw ” Security Seal of Norton Company ” But Soon After 5 minutes I came to Know That your Soneri Bank is in Wrong Untalented Hands because you Guys are hiring noobs with degree but Real Talent of Pakistan is always without degree See the diff,

Your World Class Internet Banking System secured by Norton Compromised within 5 Minutes , ain’t funny ? 1 more thing Your multi Billion Dollars data is in my 10$ USB Drive :P Because my 10$ little USB Drive is More Secure then your fuckin Million Dollars Setup and My computer’s data never leaked like your Bank’s data

Register at www.PAKBUGS.Com and Learn Some Cool Stuff related to Hacking and Security Where is Your Million dollar$ Firewall Honey ! Where is your Cyber Experts I.T team ? Where is So called Cyber Security Gaint Norton who Secure you han? ….

Note:- We Didn’t transfer even 1 Dollar From your System ! Don’t Forget to say thanks to PakBugs !

Later on another hacking group called Pakistan Cyber Army defaced the page again and claims to have restored the website. This defaced page is still appearing on Soneri’s website:

This is the first time that the online banking section of a bank is hacked and defaced by hackers. This incident has raised serious concerns about the security of online banking system in Pakistan.