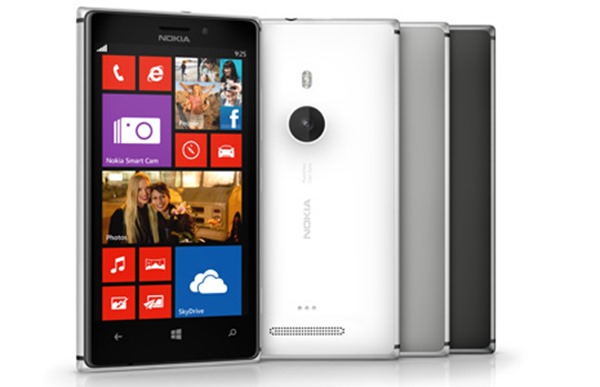 Merely days after announcing its highly anticipated Windows Phone the Lumia 928, Nokia has come back and given the Smartphone world another blow (in both good and bad ways) in the new Lumia 925. The phone isn’t substantially different from the previous 920, 928 flagships but finally brings a sleeker, slimmer body.

This is the first phone in the Lumia line-up to be made of aluminium. This is not a full metal body since the back is still made of polycarbonate plastic but nonetheless gives the phone a fresher look. The phone is also notably slimmer (at 8.4mm) and lighter (139 grams) compared to the 10.7mm and 185 grams of the Lumia 920.

The design also puts it in the same league as the HTC One and iPhone 5 since those too are made of premium quality materials.

It’s an AMOLED ClearBlack panel so the blacks must be pretty good. Protection is done by Corning Gorilla Glass 2. Pixel density is 334ppi.

And here’s the star of the show. No, it doesn’t bring anything exactly new to the mix but is still one of the very best in the market right now. The Lumia 925 features an 8.7 megapixel camera with Optical Image Stabilization (OIS) and f/2.0 aperture.

There’s also a dual LED Flash at the back unlike the Xenon one found in the Lumia 928. Just like pretty much every other flagship, it is also capable of shooting 1080p Full HD videos.

Nokia has added the Smart Camera app in the phone though which adds modes such as Action Shot, Motion Focus, Burst Mode and Best Shot along with some editing. And there’s a 1.3mp front-facing camera too.

The phone again doesn’t bring anything substantially different here. First of all, it features the exact same software, i.e. Windows Phone 8 as others along with some ‘special’ Nokia apps. Under the hood, it features the same dual-core 1.5Ghz Qualcomm Snapdragon MSM8960 processor with 1GB RAM and Adreno 225 GPU.

It also offers the same rich connectivity as its predecessor. To start off, it uses micro-sim for data. Then there’s Bluetooth 3.0, microUSB 2.0, Wifi Hotspot, 4G LTE, GPS and NFC. The phone features a non-removable 2000mAh battery. There’s wireless charging too but it’s enabled via an additional accessory so it won’t exactly be used by many. The Lumia 925 will be available in Silver and Grey.

As written several times earlier, the phone is virtually the same package as the earlier Lumia 920 and 928, except for the design and lack of Xenon Flash. But the design itself is a huge plus since the weight and thickness of the Lumia 920 made it a big no for a lot of people.

In the end, here’s the specs roundup:

The phone will be available in June this year for $610 (around Rs. 65000). That puts it in the same line as every phone else in the market including the Galaxy S4 and HTC One.

There will be two questions to answer then before buying this phone: How much do you really want a Nokia & Windows Phone and can you live with a phone with a dire lack of some important apps and features. If yes, then this is the phone to get and if not, then you can find pretty much any phone you want in the market for the same price.