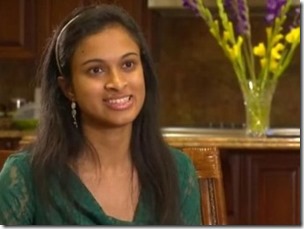 Have you Ever thought of fully charging your mobile phone with-in 20 seconds? If yes – then your wishes are going to meet reality very soon.

An Indian American girl, who is just 18 years old, has invented a super-capacitor device that could potentially charge a cellphone in less than 20 seconds.

Eesha Khare from Saratoga in California has developed this tiny device that fits inside mobile phone batteries that could allow them to charge within 20-30 seconds. This tiny device — that can pack a lot of energy into a tiny space — can keep powering cellphone for even longer duration than the conventional batteries.

Eesha demoed this tiny so-called super capacitor this week at the Intel International Science and Engineering Fair, and for which she won a prize of USD 50,000.

Eesha’s invention has already attracted Google’s attention, along with various other tech companies who have been trying for long for such a rapid-charging solution.

According to the Eesha, her device can last for 10,000 charge-recharge cycles, compared to 1,000 cycles for conventional rechargeable batteries.

The gadget has, so far, only been tested on an LED light, but the good news is that it has a good chance of working successfully in other devices, like mobile phones, expert say.

“It is also flexible, so it can be used in rollup displays and clothing and fabric. It has a lot of different applications and advantages over batteries in that sense,” she added.