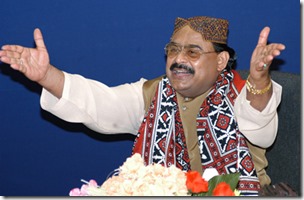 Pakistan Telecommunication Authority has been made a party in a case filed against Mr. Altaf Hussain of Muttahida Qaumi Movement (MQM) for allegedly speaking against the ideology of Pakistan in his speech on May 12, 2013.

PTA – which was originally not nominated a party by petitioner – was advised by Lahore High Court judge to be made a party because it was also responsible for providing the opportunity of live speech in Pakistan from abroad.

Advocate Fayyaz Ahmed Mehr had filed a petition on Wednesday, stating that Altaf Hussain is a foreigner claiming to be the chief of MQM and his demands are against the constitution of the Islamic Republic of Pakistan and also against the ideology of the country.

On May 12, during Altaf Hussain’s address to his party workers, he had threatened the Election Commission of Pakistan (ECP), establishment, media, workers of the political parties and politicians and also demanded that Karachi be detached from Pakistan, said the advocate in his petition.

The petitioner termed it a “conspiracy” and a move to destabilise and create unrest in the country.

The petitioner stated Altaf Hussain is not a citizen of Pakistan and cannot claim to be the chief of a political party.

It is believed that regulations might be legislated for live political speeches from aboard over phone.