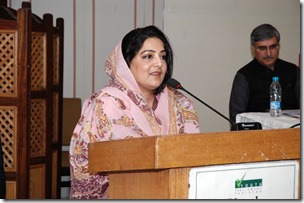 Anusha Rehman Khan, the newly appointed State Minister for IT and Telecommunication, managed to grab media attention on her first day in office by saying that Google could face a blanket ban in the country if it doesn’t listen to Pakistani government’s request of removing blasphemous videos from YouTube.

Ms. Rehman, who remained a vocal and active member of National Assembly Standing Committee on Information Technology during previous government, straight away took Google hard and said that Pakistani government will ask Google – the parent company of YouTube – to block the access of blasphemous videos in Pakistan, exactly like they have done in various other countries.

She hinted that government can consider banning Google in the country if Pakistan’s requests aren’t entertained by the Google.

Anusha Rehman also maintained that new government will do all its efforts to bring YouTube back, but after getting the anti-Islam videos blocked in the country.

Pakistan is working on a filtration system that will enable Pakistani government to control the viewership of content in the country. “We will pump in extra money if needed and do whatever is in our capacity to bring YouTube back to Pakistan without compromising our ethical values”.

Google has previously denied Pakistan’s request of blocking anti-Islam videos in Pakistan, however, same objectionable videos are blocked in various other countries including Syria, Egypt, Singapore, Russia and others.

Anusha’s statement of banning the Google in Pakistan is receiving negative feedback, however, others are calling her statement as only solution to a rigid company like Google which is demoing discrimination by blocking videos in some countries while not blocking in others.

In a related news, Google, known as the champions of Freedom of Speech and users’ privacy, is found selling users’ information to American government since 2007.