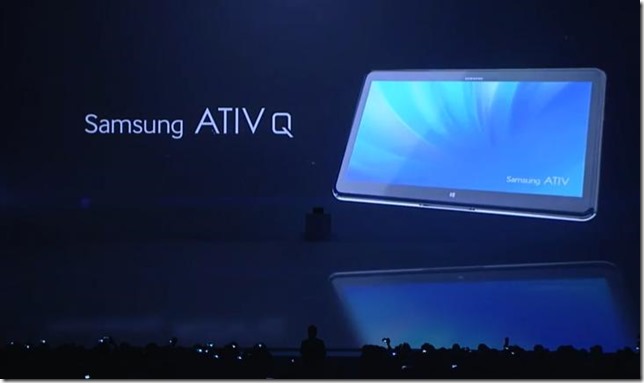 Samsung has just announced a new duo of (primarily) Windows 8 running tablets at an event in London. The new tablets, the Ativ Q and Ativ Tab 3 are the new stars of the face of Samsung’s current crop of its Windows 8 running portable devices.

The Ativ Q is certainly the more important and high-end of the lot. The biggest feature of the device is its capability to dual-boot Android 4.2.2 Jelly Bean and Windows 8 at the same time, i.e. the best of both worlds, unlike most other Windows 8 and Android-running devices which have to be rebooted to switch between the two operating systems and even have different hardware.

To start with, it has a 13.3 inch display, which also happens to have a mighty resolution of 3200 x 1800 pixels with a pixel density of 275ppi. Still, it’s just half an inch thick and weighs 1.29kg. It also sports a hinge under the display, which is quite similar to the one on Acer Aspire R7 and moves around depending on the way you prefer it to be. Above the display is an HD camera.

Under the bonnet, it houses an Intel Core i5 Haswell CPU, Intel HD Graphics 4400 and 2 GB RAM. The SSD storage can be up to 256 GB. For connectivity, it uses one USB 2.0 and one USB 3.0 ports, Wifi, microHDMI, card slot and Ethernet(via dongle). Oh, and there’s S Pen too.

Despite all this muscle, the Ativ Q, according to Samsung, can live for up to 9 hours before requiring a charge, which is a big feat considering the powerful display and Haswell processor. Another big aspect of the tablet is its ability to merge both Android and Windows. Android apps can also be pinned to your Windows 8 Start Screen due to the “SideSync” software. Such sharing between multiple operating systems is unheard of before.

Pricing and availability details are under the curtains as of now. 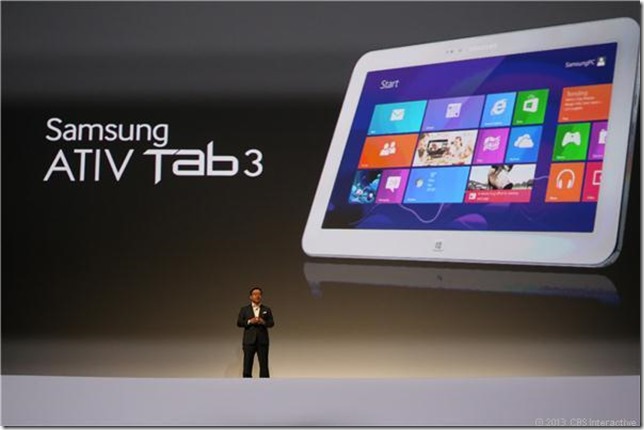 The Ativ Tab 3 was another Windows 8 running tablet announced by Samsung. Its not even nearly as inspiring though.

It packs a 10.1 inch display with resolution of 1366 x 768 pixels. It does have a super thin design, though, of 8.22 mm which, according to Samsung, makes it the thinnest Windows 8 tablet to date.

Under the hood is an Intel Atom CloverTrail processor with 2 GB RAM and 64 GB internal storage, which may give you a bit of a headache after some time, given its meagre size. For connectivity it uses one microUSB and microHDMI ports.

Porting their reknowned technology, Samsung has also added the S Pen feature to this tablet, which according to them is much more improved than ever and is compatible with the Full MS Office suite which comes pre-loaded in the tablet.

The Ativ Tab 3 will be available in August for $599 without and $699 along with the keyboard accessory.