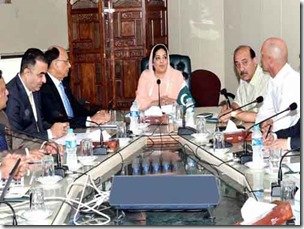 CEOs of the five mobile companies met yesterday with Minister of State for Information Technology and Telecom Ms. Anusha Rehman to discuss regulatory issues that industry is facing during past several months.

Telecom heads were given all the attention and time to communicate their concerns to the minister, few of which were:

Ms. Rahman reiterated government’s intentions of supporting telecom businesses and said that all concerned issues will be properly addressed. For the purpose two committees were formed to workout the issues faced by telecom industry and to monitor the spectrum auction of 3G licenses.

It is interesting to note that none of the consumer problems were discussed during the meeting, such as compensation for the monetary loss of customers during the cellular suspensions or the degrading quality of telecom service. It merits mentioning here that PTA hasn’t conducted any QoS survey for over two and half years now.

Furthermore, no regulatory issues were discussed that could impact the operators, such as revision of cellular policy and other telecom and broadband policies that expired in 2009.