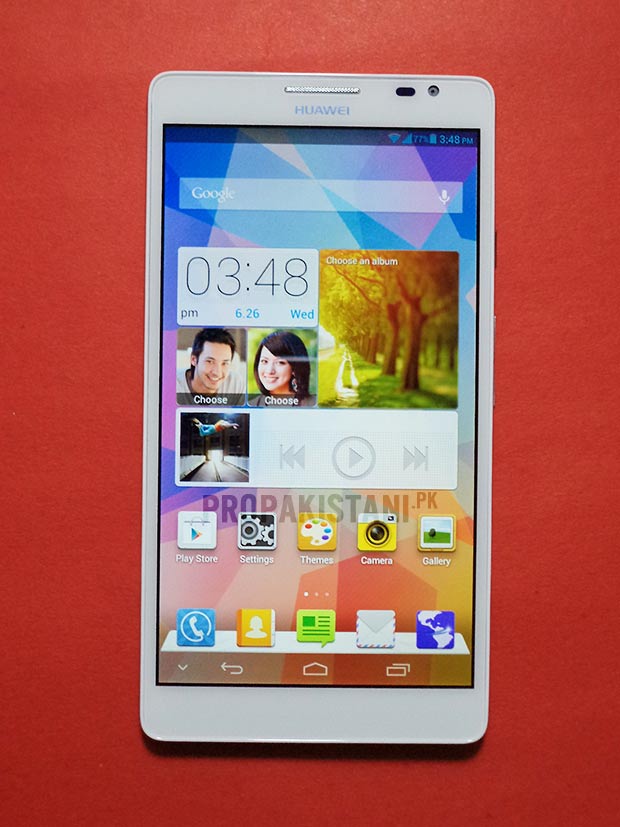 Last week Huawei introduced its first phablet Ascend Mate in Pakistan with a reasonable price tag of Rs 38,000. Just in case if you don’t know, a phablet is actually a smartphone but with a huge screen — as huge as tablets — and Ascend mate got a big 6.1″ screen.

Lets get straight to the Un-boxing and Hands-on video first: 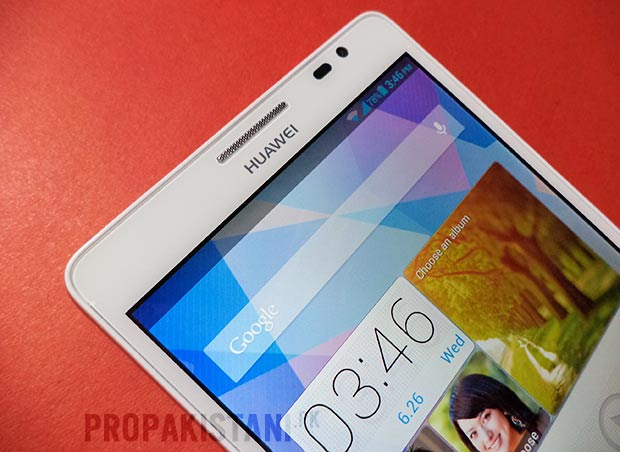 Huawei Ascend Mate is a big phone, the first thing you notice about this phone is its size and a large screen which covers most of the front side.

Mate is 6.44 inches long and 3.37 inches wide, as compared to its big size the phone is only 9.9mm thick which consists a chrome strip running around the edges. 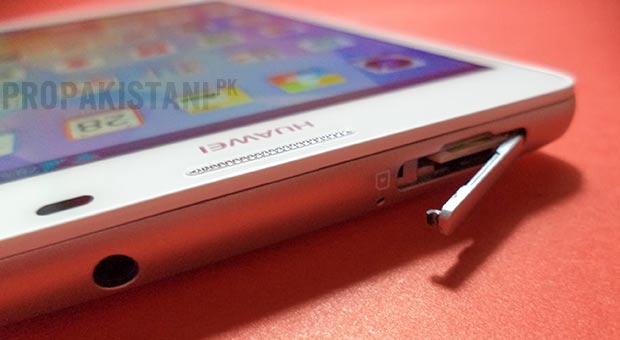 Just like all other devices Huawei showcased at the CES, Ascend Mate has the same generic smartphone look. Front side has a 6.1″ IPS capative touchscreen with Gorilla Glass protection.

The bezels are extremely thin and hence more than 73% of the front is covered by the screen. Huawei Ascend mate features a 720p resolution. With such a strong display the IPS panel provides sharp and crisp images with excellent color and brightness at all angles.

You can also use the screen while wearing gloves by enabling the gloves mode. 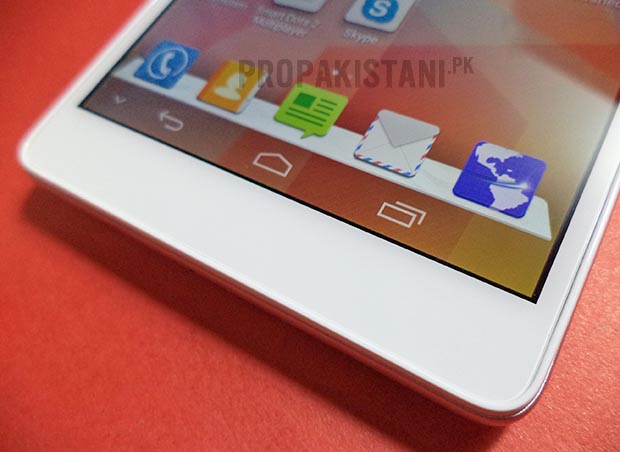 Above the screen there’s an ear speaker with notifications LED embedded in the grille, light sensors and 1MP front facing camera.

There is nothing else on the front as the keys: back, home and multitasking keys are actually inside the screen and you can also hide them. 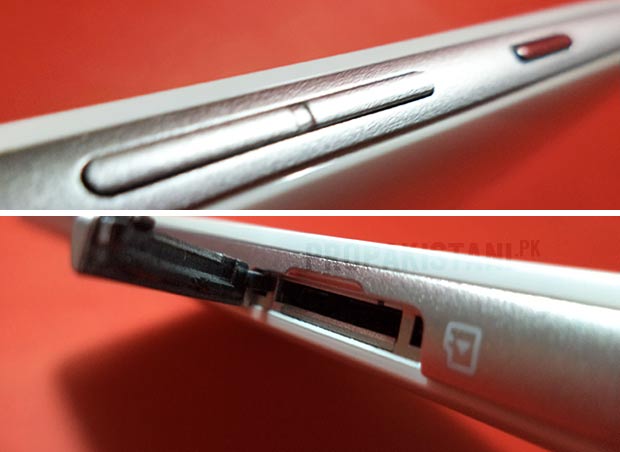 The volume rocker and the power/unlock is placed on the right. You can easily use these keys while holding the phone with one hand.

The left side features a microSD card slot. Micro SIM slot, secondary microphone and 3.5mm audio jack are located on the top. On the bottom we have a microUSB port used for data transfer and charging with the primary mic. 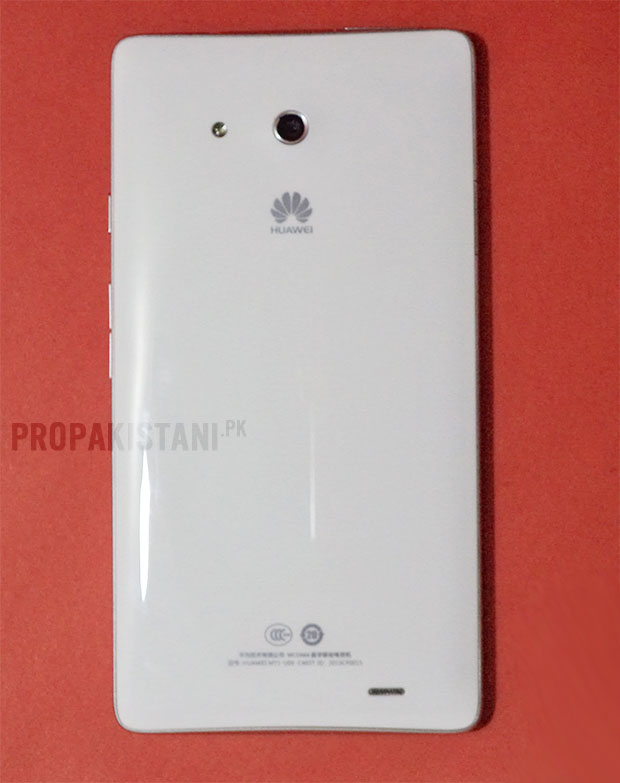 The two different colors of Ascend Mate have different kind of non-removable curved back plates, the black one is slightly rubberized where as the one we got (White) is glossy, which may attract scratches over the time.

Primary 8MP camera with a single LED flash light is located on the top middle, with the Huawei logo directly beneath it. The bottom left corner hosts the loudspeaker, which comes with Dolby Digital Plus sound optimization.

The speaker isn’t very loud but the sound quality is impressive. 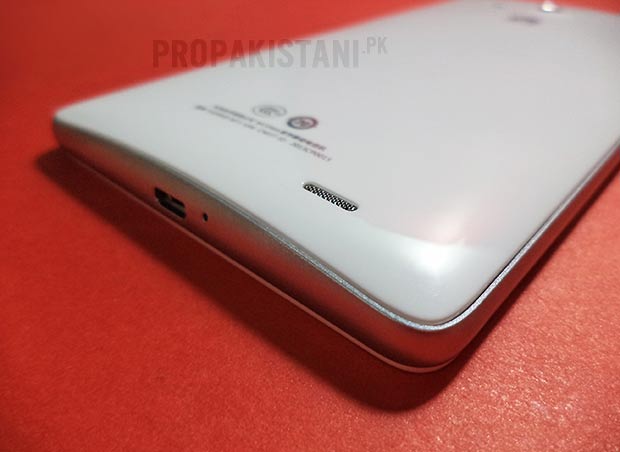 Though the phone is really big and weighs almost 200 grams, but it is a well made phone.  The material used is of premium quality and doesn’t feel cheap plastic like Galaxy Note 2.

Huawei Ascend Mate comes preloaded with Android 4.1.2 Jelly Bean. When I first connected the phone to the Internet, a 150MB+ update was offered and I thought it would bring the Jelly Bean 4.2 – but it was just a patch to address some bugs. We have talked to the Huawei team and they have assured that a Jelly Bean 4.2 update will be made available for users soon.

Just like all other Huawei smartphones, Ascend Mate features Emotion UI, though it runs the latest version 1.5 with a white theme for settings rather than the usual black and blue. 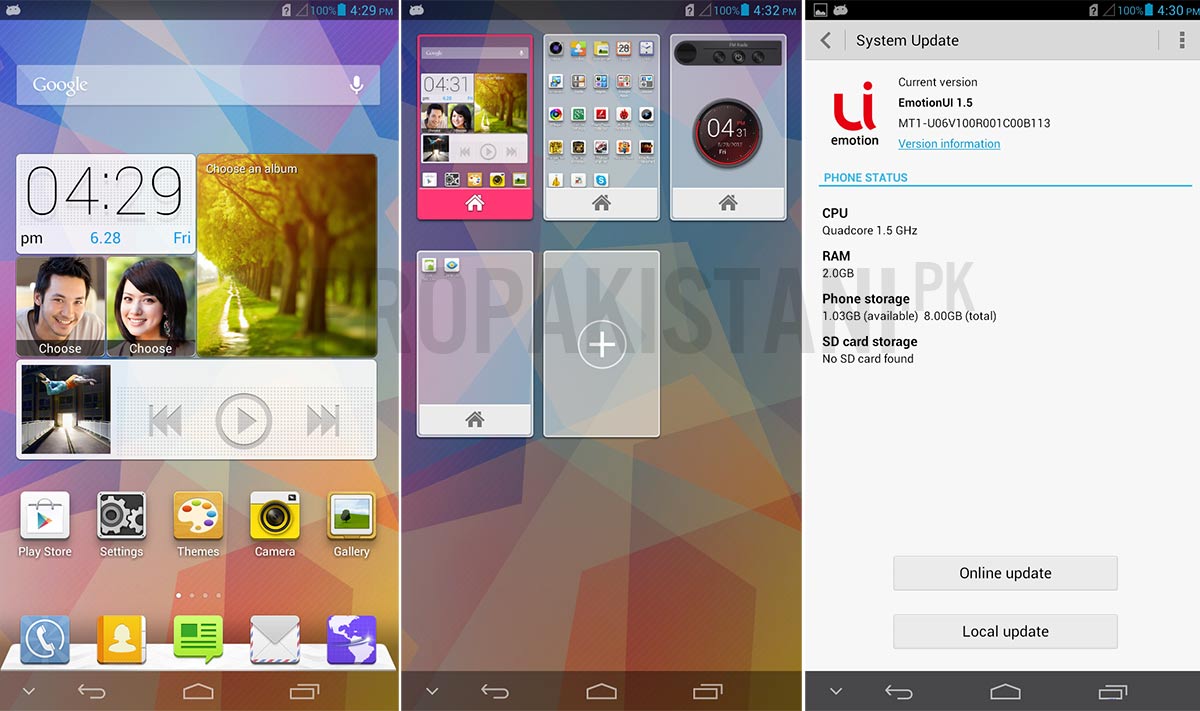 The Back, Home and Task Switcher buttons are now placed on the screen and you can hide them in the settings — after which these buttons will show up only when you swipe up. This feature is pretty useful when you are playing a game and don’t want to see the buttons on the screen.

In Emotion UI there is no app drawer, and everything is on your homescreen, with no shortcuts. You can add unto 9 homescreens and arrange your apps in folders if you like. You can also add widgets on the homescreens.

Huawei has added some custom widgets including the ones that comes with stock android. The notifications toogles provide quick access to services like Profile, Wi-Fi, Bluetooth, GPS and Brightness. You can set 9 toogles buttons in the top row.

You can change the looks of your homescreen and icons by choosing 16 different themes or you can customize any theme according to your taste. The themes also changes the lock screen layout of your are using Huawei lockscreen. The screen menu also offers different kind of transitions.

Emotion UI in Ascend Mate offers some new features like “Shake to Change” or Random Wallpapers, Power Manager which helps you choose the right power settings for your device from three customizable modes – Intelligent, Normal and Optimum Performance It also includes start up manager and display color tones. 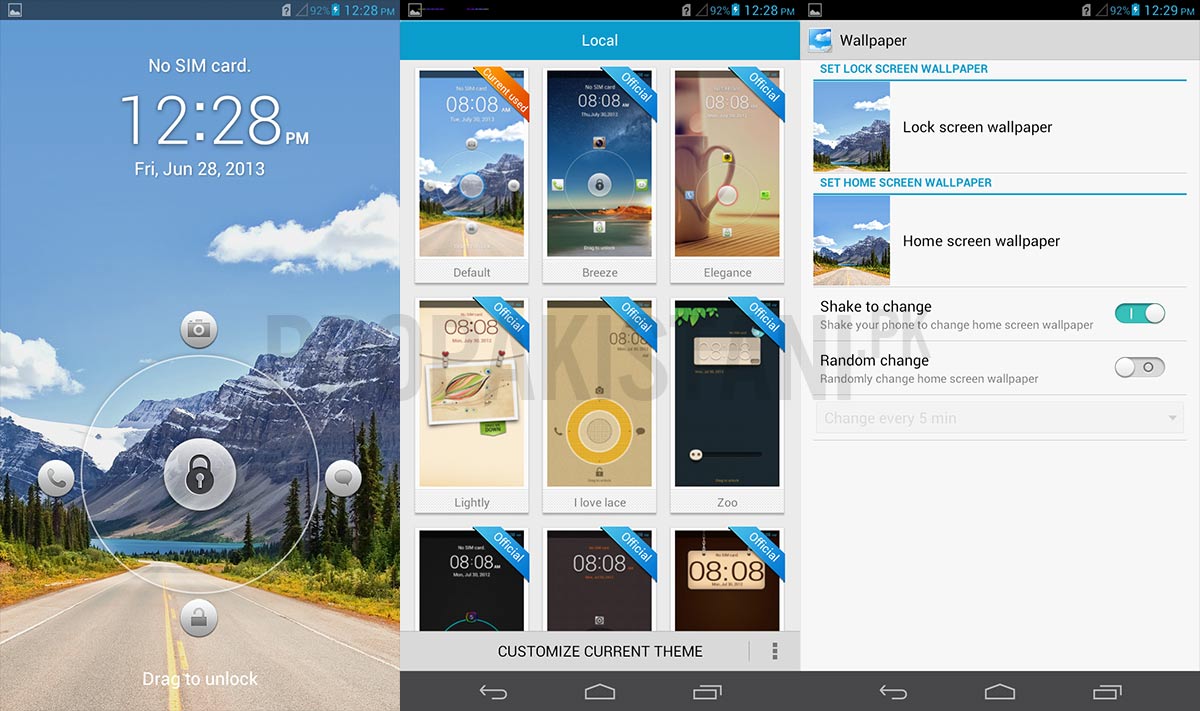 A new addition is the suspend button, which gives you a semi transparent shortcut button for calculator, gallery, messaging and note and draws over other applications, it could be more useful if you could customize the shortcuts.

Emotion UI comes with a custom dialer and keyboard, which also offers one hand operation. So if you are uncomfortable using both hands for typing a text you can easily switch to one hand layout, though it may take a little practice to get used to it.

Ascend Mate is powered by HiSilicon K3V2 chipset, Quad core Cortex A9 1.5GHz processor and 16-Core GPU with 2GB of RAM. The chipset architecture isn’t very advanced and the latest devices running on Cortex A15 or Krait can easily beat it in the benchmarks but still Mate’s performance is very good.

You won’t feel any lag while scrolling the homescreens, browsing websites, running multiple applications at the same time or playing a resource hungry video game.

The phone can easily run HD videos and you can play almost all latest 3D games, and yes you can install VoIP applications like Skype and Viber on Ascend Mate without any problem. The regular calls and texting is also flawless and you get good signal reception as well as the Wireless connectivity is very quick.

Have a look at the benchmark scores, which are quite satisfactory for a device in this price range as the real life performance of the phone is very excellent: 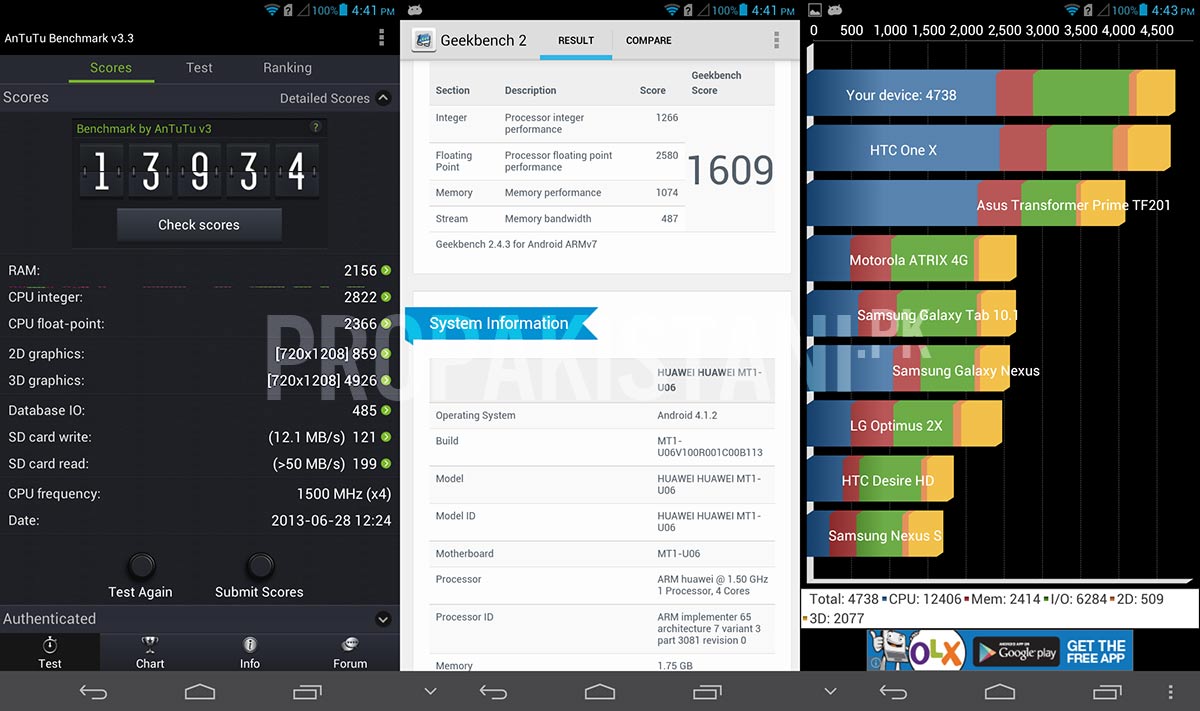 Ascend Mate is packed with an 8MP with Single LED flash light on the back and a secondary 1MP camera on the front. Though the main attraction of the phone isn’t the camera but Huawei Ascend Mate performs exceptionally well. The level of details for captured images is very good and contrast and sharpness of the screen makes the images look alive. 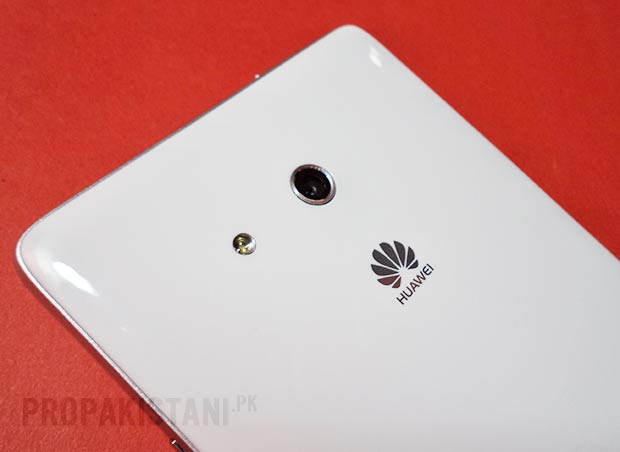 The primary camera offers a maximum resolution of 3264×2448 pixels. The interface is pretty simple. There are some image quality related settings, effects and and shooting modes available to select from. As there is no dedicated camera key, you have to use the software button for taking images, the face-detection and auto-focus feature helps you to get a perfect shot but you can always tap on the screen to tell it where to focus.

But if you don’t like tapping the screen for taking images, let me tell you another way to capture images. You can use the volume rocker as the physical key. Use the volume down key to focus and press the volume up to capture.

Ascend Mate’s primary camera can record videos in full HD 1080p at 30 frames per second and the front facing camera can record in 720p at 30 frames per second. The Camcorder interface is similar to the Camera, just some basic settings and some naughty face effects. Videos are encoded in MP4 and the quality is very good. You can also turn on the LED light if you are recording in a dark environment.

To power a Quad core processor and a huge 6.1″ screen you need a gigantic battery, fortunately Huawei Ascend Mate is packed with a 4050mAh battery, which is the biggest to be used in a phablet. If you drop down the screen brightness and remain just a little careful about the usage, you can get almost 2 days of battery out of Ascend Mate. You can easily use this phone for a single day after full charge if you love playing videos games, browsing and video calling continuously.

The phone settings offer three different power modes as well as a battery saver application, so if you are low on battery you can optimize its usage by turning off unnecessary features and killing resource hungry apps. 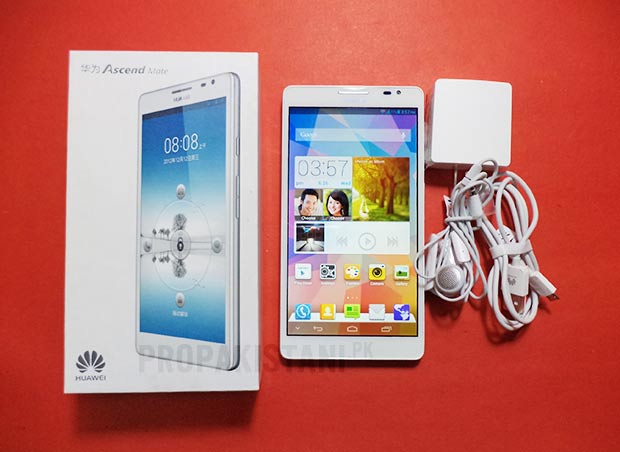 Huawei Ascend Mate is big and bold, this device is for a different class of people, who like big screens but don’t want to carry a tablet with them. Though this device performs low as compared to other high-end phones like Galaxy Galaxy S4, HTC One, Lumia 920 and Galaxy Note 2, but considering the price of Rs. 38,000 the Ascend Mate is definitely a good gadget to go with. (You can buy two Ascend Mate phablets for the price of one Galaxy S4). 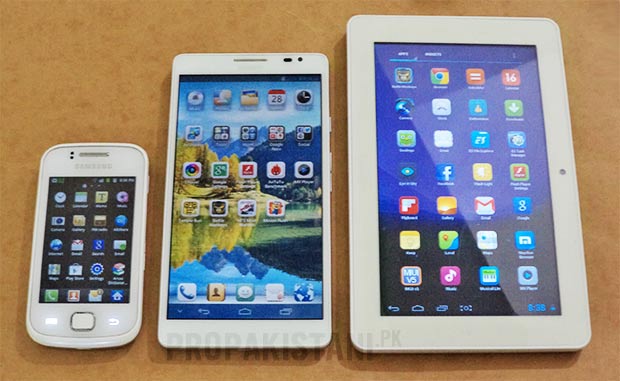 The big size can cause some problems while carrying the device – though it fits perfectly in a jeans pocket but you won’t feel comfortable with that. However, there won’t be any problem for women as they can keep it in their spacious handbags.

As Huawei’s CEO Richard Yo call phablets the future of smartphones due to their “all-in-one” nature,  we can expect a successor of Ascend Mate soon, but next time they should take the advantage of big size by adding a stylus, Dedicated Camera key and NFC.

Share your opinion about the phone, will it blend? Do you think that it has the potential to beat Samsung? which is the only other company selling phablets in Pakistan? or if you have any questions feel free to ask us using the comment box below.