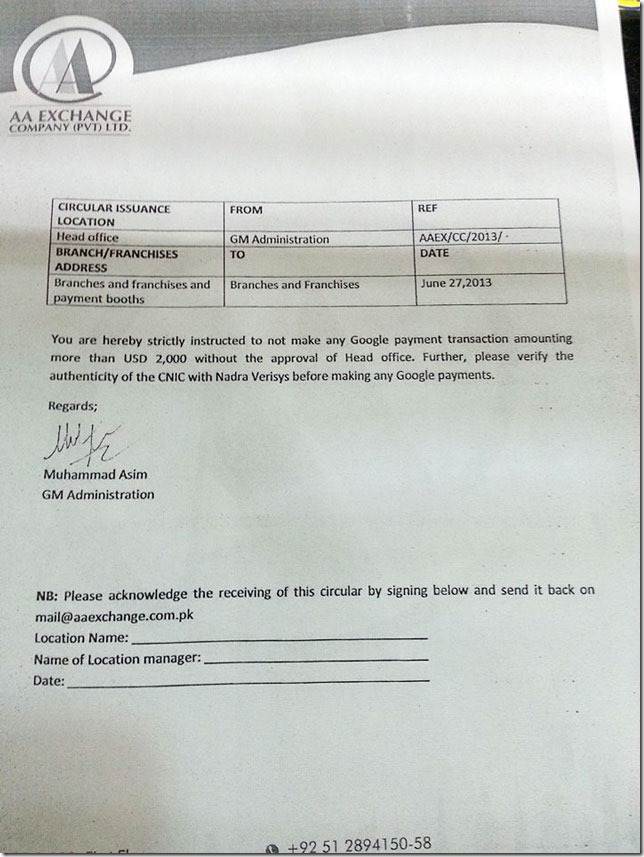 Majority of Western Union agents in Pakistan are not paying Adsense payments to Pakistani publishers, told various publishers and bloggers.

Publishers said that Western Union agents will simply not payout anything coming from Google’s Adsense program and that they are still waiting for their monthly payments to get cleared.

For those who aren’t familiar, Adsense is a Google’s arm which allows publishers and bloggers to display Google ads on their websites. In return they get paid on monthly basis through Western Union. However, starting this month, majority of Western Union agents across Pakistan are not issuing payments.

Bloggers and Publishers, who earn their livelihood through Adsense, are now left with no option as Google isn’t responding to their queries and Western Union agents are in no mood to clear the payments.

Through a source, requesting anonymity, we know that Google has nothing to do with the blockade of payments. Its the local exchange companies which have decided to not to pay Adsense payments.

Apparently the decision was taken by exchange companies after reported fraud cases in which Adsense payments were collected by someone else by forging authentication documents. In such fraudulent cases MTCN numbers – transaction ids with which a payment is processed and held secret – were reportedly leaked by Western Union agents.

Seemingly to avoid such frauds, exchange companies are taking this measure which is leaving hundreds of thousands of publishers — country wide – without monthly Adsense payments.

Following is a letter that is allegedly issued to all Western Union agents:

In contrary to the above letter – which says to not to issue any payment exceeding USD 2,000 – agents are not issuing payments at all, regardless of the transaction value.

Thanks Hamad Dar for sharing the letter.