The ailing PC market is currently seeing its condition get from bad to worse, as once flourishing computer manufacturers are folding and seeing the inevitable fate becoming a reality quickly.

HP, just one among them, has been seeing such times as well since quite a long time and now has seen itself being overtaken by Lenovo to slip down the rank of the world’s largest manufacturer.

The new statistics by Gartner tell us that the Chinese company shipped 12.6 million PCs in the last quarter, attaining a marketshare of 16.7 percent, compared to HP’s 12.3 million (16.4 percent). Dell and Acer filled the next spots by shipping 9.2 and 6.2 million PCs respectively, followed by ASUS which shipped 4.59 million units.

The PC market overall dropped 14 percent over the last year, shipping only 75.6 million units. This happened despite the fact that new Windows 8-running systems flooded the market.

The times certainly won’t be changing anytime soon for the PC vendors have customers flocked towards the tablet & portable gadget markets, keeping well clear of the formerly-ruling industry.

Still, some markets such as India showed some positive signs so instead, this time it might be the developing markets which will lead the way forward. 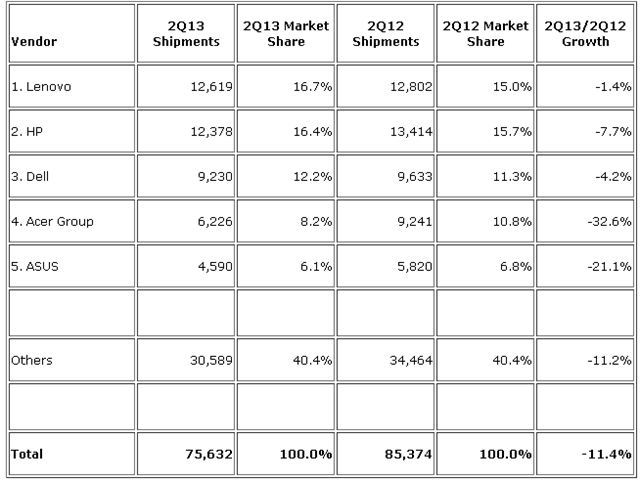