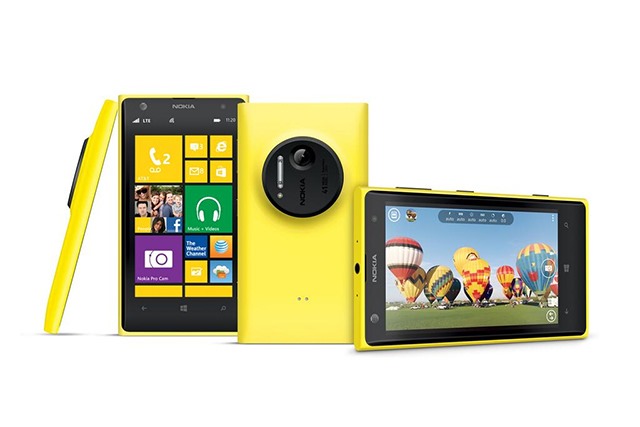 Windows Phone fans, the moment you all have been waiting has arrived as Nokia, the most-prominent WP8-utilising company announces its next flagship.

The new Lumia 1020 smartphone marks a huge moment, both for the platform and for the smartphone industry in general. The phone’s announcement wasn’t as exciting however as almost all of the specs and introductory videos were already leaked online before the official word. Here’s the phone in detail: 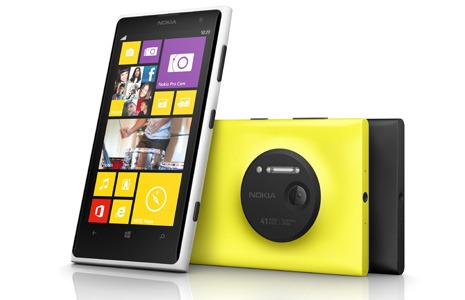 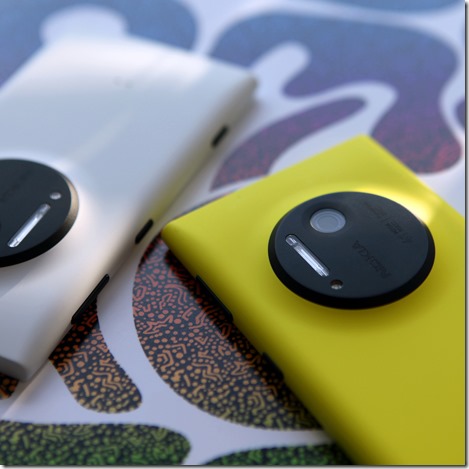 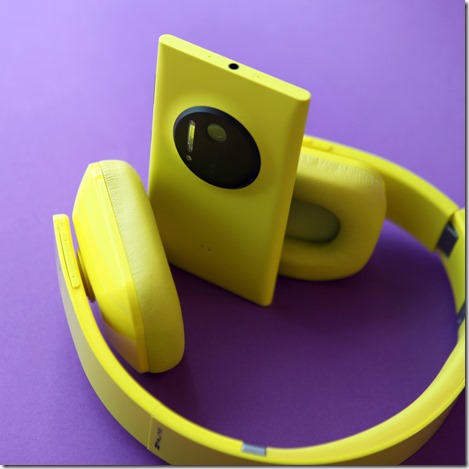 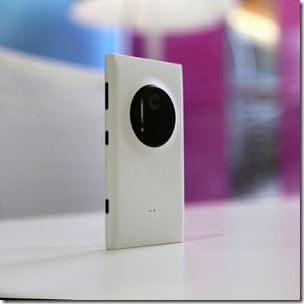 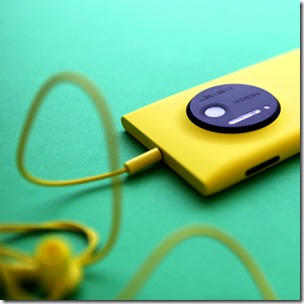 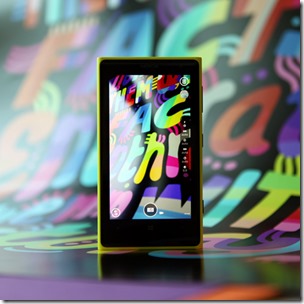 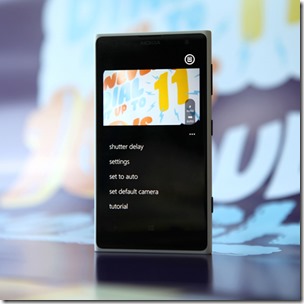 The Nokia Lumia 1020 looks a lot like its predecessor, the Lumia 920 and other phones in this series. The body is made of unpainted polycarbonate plastic and the design is unibody. The front is almost identical to the 920. The display, 1.2 megapixel HD camera, soft-keys and sensors are housed there. The back however is the center of all of the attention. It houses the bumped-up camera which protrudes out, unlike the 920. The 41 megapixel camera is accompanied by a Xenon and an LED Flash. (More on that later).

The device is overall much more compact and slimmer. It weighs an acceptable 158g now and is 10.4mm thick.

The display uses almost the same tech as its predecessor. It’s a 4.5 inch AMOLED panel with the same resolution of 768 x 1260 pixels. It features the same supersensitive touch which means you can use it with almost anything and the PureMotion+ HD, which means buttery smooth graphics and animations.

The screen is protected by Corning Gorilla Glass 3. If the lack of Full HD resolution is a bummer for you, then you need to know that Windows Phone itself currently doesn’t support it right now.

And here’s the main reason why you’re here. The Lumia 1020 features a ground-breaking 41 megapixel camera, quite identical to the 808 PureView with a large 1/1.5” Back-illuminated sensor and 6-element Zeiss lens. Optical Image Stabilization promises blur-free result.

The camera lens features mechanical shutter with f/2.2 aperture. It features the same pixel oversampling tech where you combine several pixels to make a giant pixel for better snap quality. The camera can also take a 38 or 34 megapixel image and a 5 megapixel oversampled image at the same time (which is much more Facebook-friendly).

As for the video, the phone takes 1080p Full HD videos at 30fps and can have up to 4x zoom (or 6x zoom in 720p mode). What’s also worth noting is that the zoom here is lossless. The two built-in mics make sure that the audio captured is clear even in loud atmospheres. Oversampling can also be done in videos at an staggering rate of up to 1 billion pixels per second. Now that is something!

The lens is accompanied by Xenon and LED Flashes for stills and videos respectively (they’ve combined elements from both N8/808 and the Lumia series here). The camera sensor and lens itself are completely new and much more compact, faster too. The BSI sensor is a bit smaller than the 808 and so are the pixels at 1.1 micron.

The camera software is also worth writing about. The Lumia 1020 features the powerful Nokia Pro Camera app where you can manipulate the result of your photos (including ISO and shutter speeds) at will. It can capture two shots of 34/38 and 5 megapixel at once (we’ve already talked about this). The interface is ring-like, where the different settings are scrolled up and down. You also get a full-manual mode, perhaps a first for a smartphone and a thing found mostly in professional cameras.

The physical shutter key adds to the camera-like experience. Nokia has announced a new SDK which will be used by app developers to take full advantage of the phone’s camera. A few apps like CNN, Flipboard, Path and Vine have already started utlising it.

And that’s about it for the camera. If you’re a shutterbug, it will alone be a strong reason for you to buy this phone, as it’s not only several lightyears ahead of almost all other phone cameras, but also because the operating system surely has a future ahead (unlike Symbian).

We’ve already talked about the Pro Camera app of this phone but the rest of the software is pretty much standard Windows Phone stuff. You do get the Nokia-only software which is quite a perk and a huge distinguishing feature of the company’s WP8 smartphones.

A new feature which debuted on the Lumia 925 is ‘Glance’ which is a clock that appears on the homescreen. It can also display a few notifications and your phone’s status.

Other than that, you get Nokia’s popular HERE service, along with apps like Nokia Music, Nokia Maps and Nokia Drive which are all pretty valuable. The phone runs on Windows Phone 8 and the next major step for it will be the 8.1 update. Still, the phone is decidedly lacking in the OS front and that’s solely Microsoft’s fault.

The phone’s hardware is nothing revolutionary. Under the hood you get a 1.5 Ghz dual-core Krait processor with Qualcomm SnapDragon S4 chipset and Adreno 225 GPU.

The amount of RAM is set at 2 GB, highest for a Windows Phone yet, along with 32 GB non-expandable storage (a 64 GB version will be there as well but that might be a bit unique). You’ll also get 7 GB of free SkyDrive storage.

The Lumia 1020 covers almost all the sections in the connectivity department. You get 4G LTE to start with, then NFC and wireless charging (more on that in a minute) and finally get Bluetooth 3.0, microUSB 2.0 and dual-band Wi-Fi. You don’t get Infrared however but it’s still not essential anyway, atleast for the time being.

As for the wireless charging, it works with a snap-on accessory and isn’t built-in. The reason given is valid too: increased weight and thickness.

The phone is powered by a 2,000 mAh battery, which must’ve raised some eyebrows (HD screen, 41 mp camera, dual-core processor, really Nokia, really?) but we’ll have to wait and judge it by its performance in real life.

Out of all the accessories, including the snap-on wireless charging cover Nokia has shown today, the one which truly stands out most is the Camera Grip. It’s a sort of a frame or a shell which houses the phone inside it. It adds a bigger shutter key and also a 1020 mAh battery. A tripod can also be attached at the bottom of the accessory. The Camera Grip will retail separately for $79.

The phone will start selling later this month in China and several American & European markets. In the US, AT&T will sell this phone for $299 with a contract, a decidedly large sum for the phone as most flagships retails for $199. The more important however is the off-contract price, which matters for markets like ours, but is still hidden under the curtains as of now which is a shame.

Still, considering the history of Nokia’s flagships, the phone might get launched at a price tag of about Rs. 70,000, which is steep but should settle a bit with the hype.

There was a reason why Stephen Elop looked so happy today. Even some pessimists couldn’t help applaud the Nokia CEO. The Nokia Lumia 1020 marks an important moment in the company’s history. The 808 PureView was a great, but niche device which wasn’t even launched in several markets. Nokia might achieve its goal with this phone at last.

“We want to take people on a journey from capturing pictures to recording and sharing their lives,” Stephen Elop

That being said, the phone isn’t flawless. The software still lacks some important features like multitasking, the processor and GPU are a bit archaic and the battery is quite small. But that all can be neglectted if you’re a shutterbug, because you’ll always be reminded by the image quality that you are holding a marvel of engineering in your hands. We can only imagine what the future will be like.