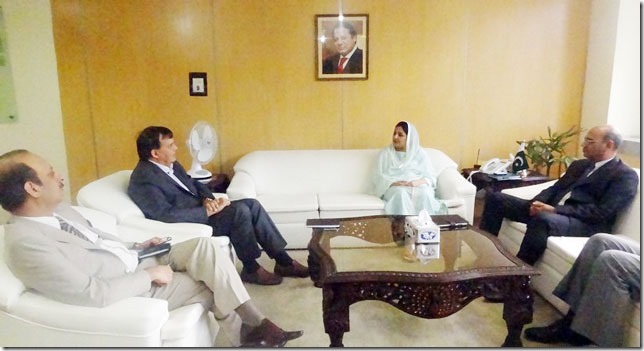 Telenor Pakistan – usually the preachers of breaking the silence against the social odds through its Khamoshi Ka Boycott slogans – has backed down from its earlier stance and said that all the recent statements appearing in media citing the CEO of Telenor Pakistan are not true.

Minister of State for Information Technology Ms. Anusha Rahman while meeting with a delegation of Telenor.

Tore Johnsen, along with a delegation from Telenor Pakistan – met with Anusha Rehman, Minister for Telecom and IT and negated all the reports that appeared a day before in press citing Telenor Pakistan CEO.

Furthermore, as per a statement issued by Ministry of IT and Telecom, Tore Johnsen appreciated the various steps for creation of business friendly environment taken so for by the new Government in Pakistan.

It maybe recalled that Lars – just couple of days ahead – had said that Telenor might reconsider its decision of investing in Pakistan – for 3G rollout – due to tightening regulations and increased taxes.

Lars had condemned Supreme Court’s decision of imposing a limit of registering maximum of 5 SIMs on one CNIC and the ban on night packages.

He had said that its easier to buy a gun in Pakistan than SIM cards.

Telenor Pakistan CEO had threatened Pakistani government by saying that his group might not invest in Pakistan again due to unfavourable business conditions and increasing taxes.

Interestingly, Lars was contradicting his own boss, Jon Fredrik Baksaas, CEO, Telenor Group, who had said last month that Telenor Group would invest over USD 1 billion in Pakistan after acquiring 3G spectrum in Pakistan.

It won’t be out of place to mention here that Telenor Pakistan added over 850,000 customers in April and May 2013, all time high during past 30 months, despite its CEO said that new sales are hard to earn due to tightening regulations and maximum of 5 SIMs on 1 CNIC rule.