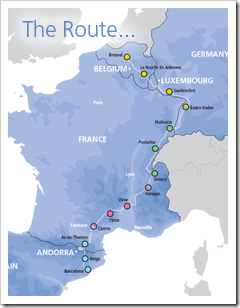 Nine employees from Etisalat’s global operations including representative from Ufone have been picked to take part in a gruelling bicycle tour across five European countries to raise awareness of diabetes and trial mobile technology to help manage the disease.

The 2,100 kilometre GSMA mHealth Grand Tour will begin in September. The team was selected from Etisalat staff in the UAE, Afghanistan, Pakistan, Saudi Arabia, Sudan and Tanzania following a series of assessments and tests.

“The candidates invited to the assessments performed excellently and it was extremely difficult to select our squad from such a pool of talent,” Abdulkarim Julfar, the Chief Executive Officer of Etisalat Group said. “I thank everyone who has participated in supporting this worthy initiative which is the first of its kind not just for the Etisalat Group but for our industry as a whole.”

Potential squad members were put through their paces in their home country and in the UAE with psychological and physical training and assessments. These included a cycle tour simulation on Yas Island’s Formula 1 Track in the summer heat, medical tests and cycle races through Cairo and downtown Islamabad.

“I think this is a great initiative for a noteworthy cause, especially because Pakistan has the seventh highest number of diabetics in the world. Therefore it’s very important to create awareness about this disease among our masses and what better way than this exciting cycling tour. ”said Salman Wassay, the Chief Commercial Officer of Ufone – an Etisalat company in Pakistan. He further added, “It is estimated that around 9.4 million people in our country are undiagnosed but have diabetes. This is indeed an alarming figure and the only way to combat this illness is through creating awareness about it. I am delighted that Etisalat has taken this positive step.”

The champions, who hail from the Pakistan, UAE, Saudi Arabia, Egypt, Tunisia, USA, Canada, Italy and Afghanistan, will be riding different legs of the 13-day tour. Beginning in Brussels, the tour takes the athletes across borders, before UAE National Faisal Yousif Alreyaysa and fellow Etisalat UAE colleague and triathlete, Dr Muneer Zuhdi,will complete the final and hardest stretch through the Pyreneesmountain range.

Etisalat’schampions have been selected from different levels of the Group from retail management through to senior management, with the youngest rider being 29-year old Egyptian national wind surfer team member andsea scout leader, Ahmed Ragaie. Several of the riders, such as Pakistani Muhammed Rizwan, are inspired to participate to show support to family members who are living with diabetes.

For Etisalat Group Director of Technology, Jason Woodrow, it is a lifelong ambition to compete in a grand cycle tour, having been inspired by the Tour de France. Meanwhile, Saudi riderAli Al Shehri is not only raising awareness of mobile health solutions, but also encouraging cycling in Saudi Arabia, a sport that is gaining popularity within the Kingdom. On the other hand, Afghani taekwondo enthusiast, MassihullahAhmadzai, is proving that as well as working hard, employees can use their spare time to help raise awareness and support causes such as this. The team also includes a certified ‘iron man’ Moncef Mettiji who holds both Swedish and Tunisian nationalities and one highly experienced lady cycler, Italian-born Sara Coppo.

Five reserves have also been named in case one of the first nine is unable to participate in September for unforeseen reasons. These include Usman Ali Akbar from PTCL, Ahmed Shekeb from Etisalat Afghanistan, Omar Okasha from Etisalat Misr, Raza Akram from Ufone and Fraser Graham from the Etisalat Group. Training continues throughout the summer, with the start of the Tour on September 5, in Brussels, Belgium.

More information about the tour can be found at: www.mhealthgrandtour.com