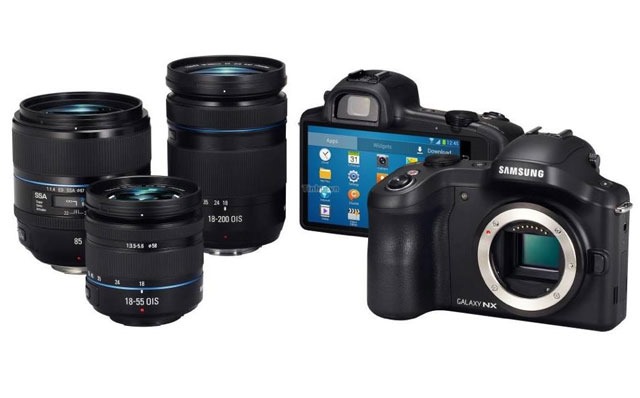 A while back, Samsung announced the world’s first mirrorless camera running on Android in the Galaxy NX but they declined to reveal its pricing. But it has been revealed now as the camera has gone on sale in Europe, for $2000 along with an 18-55mm kit lens.

That puts it in the territory of more “serious” DSLRs, a lot of whom are critically acclaimed including Canon EOS 70D, Nikon D600 and Sony Alpha SLT-A77V. Good thing is that none of those can run on Android, which is perhaps the only reason why you’ll buy this camera for such a huge price.

The Samsung Galaxy NX comes with a 20.3 megapixel sensor, DRIMe Image Signal Processor and burst shots at up to 8.6fps. The maximum shutter speed it can attain is 1/6000 sec and it also has an electronic viewfinder at SVGA resolution. The NX also does 1080p video and features a Xenon Flash.

At the back you get a 4.8 inch HD touchscreen, where the OS running is Android 4.2.2 customized with Touchwiz. The power comes from a 1.6Ghz quad-core processor, 2 GB RAM and 16 GB storage, expandable via a microSD card.

The camera supports LTE, Wifi and Bluetooth. For editing, it comes pre-installed with several software tricks under its sleeve, including Adobe Photoshop Lightroom. The battery powering the camera is of 4360 mAh.