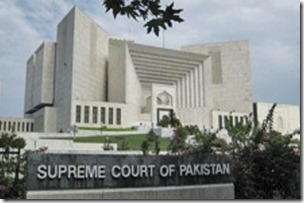 The Supreme Court of Pakistan yesterday issued notices secretaries of cabinet and finance to submit their reports detailing the reasons for the delay that was caused for the auction of 3G licenses in Pakistan.

Attorney General Office, on the matter, was asked to seek comprehensive report pertaining to process of all developments relating to 3G auction and that why it has been delayed this long.

Chief Justice observed that awarding the 3G license would generate substantial a revenue to the national exchequer and no delay would be permitted.

A three-judge bench led by chief justice iftikhar Muhammad chaudhry, comprising of Jawwad S Khawaja and Justice Sh. Azmat Saeed was hearing a petition filed by Mr. Khurram Shahzad on delay of 3G auction which is causing loss to people and government of Pakistan alike.

During course of proceeding, Mr. Ali Raza, counsel for the petitioner informed the Supreme Court that Ministry of Finance had withdrawn Rs. 44 billion from Universal Services Fund through an executive order. On which Justice Jawwad S Khawaja remarked that how could government withdraw funds from Universal Services Fund as it had no such prerogative.

He also informed the court that Pakistan Telecommunication Authority (PTA) was with out  chairman and members of the board for almost eight months. On which the bench directed the Federation to complete formation of the board and it chairman as soon as possible.

Ali Raza informed the bench that PTA employees are facing financial crisis as they had not been paid by the department for the last couple of months. Justice Jawwad S Khawaja showed disappointment over vacant posts of high officials in PTA and remarked that no one seemed interested in the department.

The CJ remarked that transparency must be observed in bidding of 3G license otherwise it would be deferred by the court. While issuing notices to secretary information technology, cabinet and finance, court adjourned further hearing till august 1.