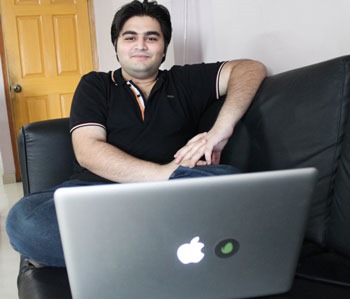 Muhammad Haris, a developer based out of Karachi, and his teammate has sold over $1,000,000 (that’s 1 million in US dollars) worth of items on Envato a.k.a Themeforest, a marketplace for WordPress themes.

Haris, primarily a coder, made this lot of money through a WordPress theme called Avada.

We remember Haris from 2008-09 when he used to freelance wordpress development work, mainly the plugins.

Haris says that he started his career as a freelancer and is still contented with his work-style and the returns.

After early days of solo work, Haris teamed up with Luke, a designer from US, and started doing WordPress theme development by enlisting their work on Themeforest.

Haris tells that their theme Avada has been sold over 30,000 times on Themeforest in less than an year.

Haris is one of those known millionaires out of the country who adopted freelancing as their careers. Currently there are millions of freelancers in Pakistan doing wonders in their respective fields. oDesk – one of the largest freelancing portals – recently said that half of their registered users come from Pakistan.

This all has been made possible by the technology enthusiasts without much support from the government and our social system.

Imagine the kind of work and goals these freelancers can achieve in presence of government support and the PayPal.