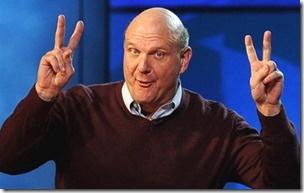 Microsoft’s sprightly and outspoken CEO announced his retirement on Friday but the news arrived to mixed reception. While some applauded him for taking Microsoft to the place where it currently is, critics panned him for the lack of innovation and virtually no future-proofing.

During his tenure, the company’s revenues increased threefolds to $77 billion while its profits to $23 billion. Most of the money was made through the Office and Windows divisions which peaked during his 13-year long tenure as the CEO. But while the company has undoubtedly been successful, there have been some darker sides to the picture too.

You see, unlike companies like Google and Apple, Microsoft has been completely ignorant to the flourishing aspects of technologies in the world today. The list of missed opportunities is huge, you name it: Search engine? Check. Music Industry? Check. Social Networking? Check. Smartphones? Almost. Tablets? Forget about it. Given the declining state of the PC industry, they’ll need a miracle to survive.

And while the whole industry amended its fundamental rules, Ballmer and co. remained in denial and laughed off at the most successful product of his era including the iPhone and Android. Who said that “There’s no chance that the iPhone is going to get any significant market share. No chance.” and “You don’t need to be a computer scientist to use a Windows Phone and you do to use an Android phone … It is hard for me to be excited about the Android phones.”? You guessed it right. Years later, both the products are giving the company a run for its money.

Still, not giving him credit for Xbox will be unfair which started during his tenure. The product which started at a time when its competitors were in strong position but Microsoft ended up beating them all. But unlike Xbox, Zune didn’t fared too well. It had huge untapped potential and at one time, seemed the only product which could’ve challenged Apple’s invincible iPod. Also he must be blamed for screwing up products repeatedly, as in the case of Windows Vista, the Xbox One and Windows 8.

Shares price remained stagnant as well. Rising to $60 during Bill Gates’ golden era, they have remained at $20s and $30s during Ballmer’s rule. They nonetheless rose by 12% at the news of his resignation.

Ballmer wasn’t a total con man, but his lack of creativity and future-proofing tarnishes his image to a lot of extent. Why is it that Windows tablets and Smartphones are facing such difficulty in the industry’s golden era, who is to be held accountable for the failure for Windows’ biggest OEMs, and will Steve Ballmer acknowledge the fact that he himself brought a lot of wrong to the entire industry? These questions remain unanswered but perhaps his legacy would’ve been better preserved had he retired a lot earlier.