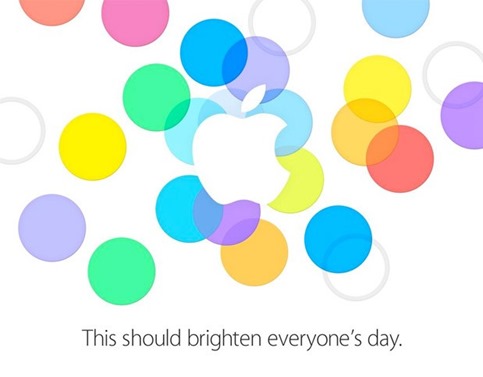 The unveiling of the iPhone is one of biggest moments of the industry. All previous unveilings of iPhone devices have always been long-awaited and this year is no different, especially since it has been largely expected that it will be the first instance of Apple announcing two phones, instead of one.

Well now, confirming several rumours the company has revealed that it will be pulling the curtains of its next generation iPhone on September 10. That’s almost a year later to the day the iPhone 5 crashed out – only 2 days less.

The press invite features an Apple logo with a colourful background and the following words below it:

This should brighten everyone’s day.

The guys at Apple surely know how to market stuff.

And while the iPhone 5S or 6 (or whatever it’ll be called) will surely be announced, its younger – and cheaper — sibling, instead, has gotten us more excited. The cheaper variant teasing itself in loads of colourful packages is certainly something to look out for and many people will be really mad if like last year, this year again the thing escapes announcement. If you want to know about all the Apple mobiles, here’s a list of the latest Apple mobiles price in Pakistan and their specs.