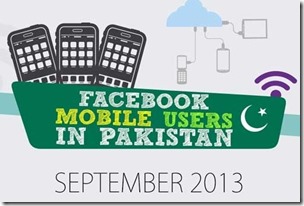 Pakistan is a huge country when it comes to mobile phone subscribers. In fact Pakistan ranks 7th in the world with its 125 million subscribers.

A large number – out of these 125 million cellphone users — now access the internet through their phones and Facebook is one of the most popular sites they visit.

These stats also hint the segments of mobile phone users in the country.

According to these stats, Android is a clear winner in Pakistan which has 2.2 million users in Pakistan as compared to 680,000 iOS users. Stats said that 920,000 users – almost one third of entire mobile Facebook users in Pakistan – are using Samsung.

Not to mention, this figure is set to grow many folds in next few years, especially after the emergence of 3G services in the country.

More stats are shown in below infographics:

Thanks to folks at Launch Pad for sharing this infographic with us.