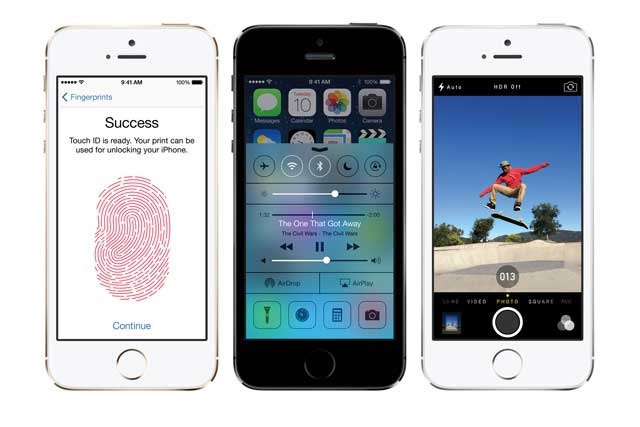 Apple has ended the one-year wait which starts off for next device just as the latest iPhone is announced.

This year, they made an amendment to the usual tradition by announcing two phones instead of one. The iPhone 5S is the top-of-the-line phone as evident by the ‘S’ and brings some incredible changes to the table.

The Display and Design

The design of the iPhone 5S follows the footsteps of the previous iterations and is made of high-grade aluminum with high-chaffered edges. It will be available in three colors: Black-Slate, White-Silver and White-Gold. One major change comes in the home button.

The button has seen its biggest change ever with a built-in 170 micron thick fingerprint scanner in it, called Touch ID. The technology’s use has been maximized in iOS 7 so alongside usual things like unlocking the device, it can also be used for things like iTunes purchasing verifications and other stuff. Multiple users’ fingerprints can also be memorized.

The iPhone 5S is very slick at just 7.6mm thin and 112g heavy. It’s also very environment-friendly, being made of components which are arsenic-free and mercury-free.

The display of the phone was one thing which was almost completely forgotten in Apple’s event. It’s still a 4 inch Retina with 640 x 1136 resolution. In an age of phablets with the Note III being announced only 6 days back, it’s a bit disappointing that Apple hasn’t enhanced the display. That was undoubtedly one of our bigger expectations. 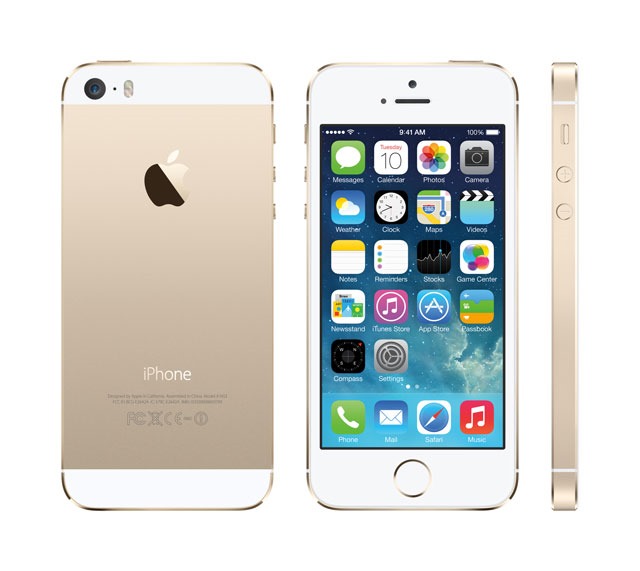 CPU And Other Internals

The iPhone 5S has seen a major overhaul under the surface. The new chip called the A7 is twice as faster as before and 40 times as faster as the 2G. It does 2 times as many general purpose and floating point registers and packs twice as many transistors (1 Billion) as the A6.

The bigger innovation is that it’s the world’s first 64-bit Smartphone processor. It will have support for OpenGL ES 3.0 and Xcode. The A7 will also have 64-bit kernels, libraries and drivers. The graphics are twice as fast as well. Overall, the iPhone 5S is 56 times faster than the original iPhone. Half of that spectacular figure is a direct blessing of A7.

The 64-bit chip is still compatible with the 32-bit apps. Also announced was an M7 chip which looks after motion-sensing in real-time and will be great for fitness apps.

The hardcore capabilities of the iPhone 5S were proven in the dazzling demo of Infinity Blade III which is also the last game of this series.

The iPhone 5S comes with iOS 7 pre-installed, of course. That alone brings quite a lot of change including flat icons, better lockscreen, Control Centre, Notification Centre and a male Siri. Apple also announced that all of its essential editing and productivity apps, i.e. Keynote, iMovie, iPhoto, iWork and Pages and Numbers will be free from now onwards. This offer is limited to new iPhones which will be bought in the future only.

As for the rest of the iPhones, the iOS 7 update is coming on 18 September.

The iPhone 5S’ camera is still of 8 megapixels with a 5-element lens and f2.2 aperture. The sensor area is 15 percent larger. iOS 7 automatically corrects white balance & exposure balance and creates a local dynamic tone map for a better image.

That’s accompanied by a new dual-LED Flash dubbed “True Tone” which consists of a blue and an amber LED and operates on up to 1000 different levels to make photos appear natural. Auto Image Stabilisation and Burst Modes have also seen an entry with the latter being triggered whenever the shutter icon is held. It shoots at a rate of 10 images per second.

As for the video, the 5S captures 1080p video at 30fps, alongside 720p video at 120fps. Slow Motion videos can also be shot. For doing that, 720p videos are shot first while the portions to be slowed-down are chosen afterwards. A combination of the two can also go along, together. Facetime camera has also been improved to perform better in lowlight.

The phone’s battery is of 1440 mAh capacity and provides 3G talk-time of 10 hours and 250 hours of standby. Bluetooth 4.0, LTE, Wi-Fi and Lightning Port are used for connectivity. And as usual, a nano-SIM card is used.

The iPhone 5S is the high-point for Apple. A lot of future-proofing has been done this time especially on the inside. Had Apple increased the display size to 4.5 inch, the package might’ve become even more tempting but even without it, the 5S is no slouch by any means.

One more thing to note is that unlike others, Apple hasn’t gotten itself into the numbers race. The camera is still 8 megapixels, screen still Retina. Why fix something which isn’t broken? For that, Apple deserves a pat on the back.

As for the phone itself, we’ll let the sales figures decide. If you want to know about all the Apple mobiles, here’s a list of the latest Apple Mobiles price in Pakistan and their specs.