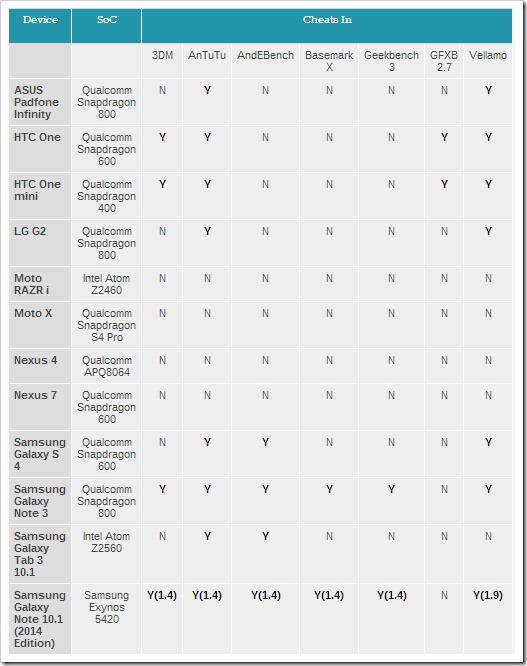 Way back in July, Samsung was caught rigging benchmark scores for its Galaxy S4 flagship smartphone.

Three days ago, that happened again, this time in the case of the Note 3. That, coupled with it getting caught posting fake reviews on HTC’s user reviews page must’ve tarnished its image to a lot of extent but now, its looking like the other companies aren’t any good either.

According to a new and detailed report by AnandTech, companies including HTC, LG and ASUS are doing exactly the same with their flagships.

How is it done? You see, different benchmark apps (majorly for Android iOS) are available at Play Store to demonstrate how the investigated Android device will perform in varying conditions. In case of the Note 3 as soon as the benchmark was started, the phone’s 4 cores kicked in at a full speed of 2.3Ghz which gave it a 20% speed boost and helped it thrash the similarly-specced LG G2.

When those culprit lines of code were identified and were removed from the benchmark app, the result was considerably less overwhelming then before.

This new report, however, identifies even more phones including the LG G2 (yes, no one’s the underdog here), HTC One, One Mini, ASUS Padfone Infinity, Galaxy Tab 2 10.1 and the new Galaxy Note 10.1 2014 as the culprits.

AnTuTu and Vellamo were the apps which saw most tempering attempts, something expected given their acclaim.

The only companies which emerged as the innocent were Motorola, Apple and Sony that didn’t indulge themselves in such practises at all.

Truth betold, not many people base their judgement of a product on benchmarks solely but still, fooling users and critics alike into believing that a product is better than it is isn’t a good thing to do, by any means.

via Ars Technica and AnandTech