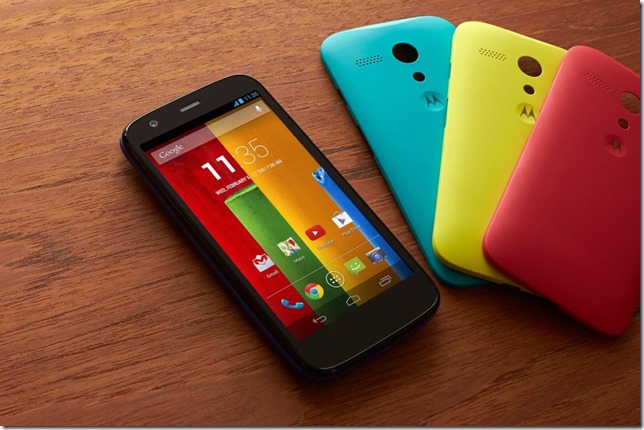 It seems as if those days have finally arrived when we would be buying inexpensive Android Smartphones with top-notch specs. Motorola Moto G is certainly one of the first such phones which, regardless of the price, promises first-class experience.

The younger sibling of the widely-acclaimed Moto X, the Moto G comes with a 4.5″ display with Gorilla Glass 3 protection on top. The design is undeniably inspired from the Moto X and there’s nothing bad in it.

Back-cover is removable but there’s no SD card or removable battery so back-covers are purely for customization.

Hardware is what you would expect to be getting at this price point. You find a Qualcomm SnapDragon 400 chipset with 1.2Ghz quad-core Cortex A7 CPU, Adreno 305 Graphics and 1 GB of RAM. Storage options are either 8 or 16 GB but both are non-expandable. Motorola will also be releasing a dual-sim variant of the Moto G in the future.

The camera on the back isn’t as exciting though. It’s a 5 megapixel unit with 720p video and Flash. A 1.3 mp camera can be found on the front. Connectivity is done through Wi-Fi, Bluetooth 4.0, FM Radio, GPS, 3G and microUSB. Battery capacity is 1,950 mAh which does sound small on paper but Motorola says it is optimized to offer a 30% longer talk time than Apple’s iPhone 5s.

Rather embarrassing for Motorola, which is a Google company, the phone launches with Android 4.3 Jelly Bean but KitKat will be coming in January. It is also vanilla.

Being inspired from the Moto X, the Moto G also comes with a plethora of exchangeable back-covers, 19 to be precise. But forget the features and start thinking about its price.

The Motorola Moto G starts at $179 for the 8 GB version and $199 when you double the storage to 16 GB. That’s aggressive pricing, whichever way you look at it since almost no Android phones with such hardware are found at this price point, well, unless if its Chinese.

Looking at its competition, we see Ashas, Lumias and cheap Androids, all of which seem a bit half-baked compared to the Moto G in one way or the other. But then again, the paper isn’t everything, is it?

The phone will be available worldwide starting from January 2014.