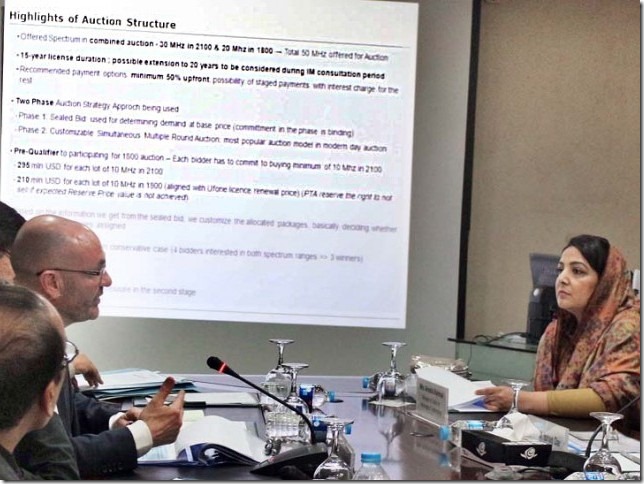 While everyone is waiting for the IM, here’s what we have already found through a snap — published above — that was pictured during today’s top level meeting between 3G Advisory Committee and Anusha Rehman, Minister for IT and Telecom and Ishaq Dar, Finance Minister.

Luckily picture’s angle fully revealed the most important slide of presentation that 3G consultants were giving to Anusha Rehman and Mr. Ishaq Dar.

Here are the highlights for 3G Auction:

Mr. Ishaq Dar has confirmed that above mentioned proposal for next-gen licenses has been approved by Prime Minister of Pakistan. For details click here.

This is what consultants for 3G – hired by PTA – have proposed the government, as evidently they are presenting the plan to the Anusha Rehman, Minister of Information Technology and Mr. Ishaq Dar, Finance Minister of Pakistan.

Consultants are now just waiting for government’s nod to finalize the IM for the public release by first week of next month.

Not to forget, this plan is not final and there might be a change in the base price or even the blocks that are on sale.

A good sign is that spectrum from 1800Mhz is put for auction as well.

Through sources we have heard that government might take-back the decision of auctioning 1800 Mhz spectrum, just to sell it at a later time.

However, moving forward, for the betterment of country it is extremely vital to auction 4G spectrum right away.

This will not only pave a way for the next gen broadband services in the country but in fact this can turn out to be an historic decision as move is likely to put Pakistan back into the top runners – regionally and globally – in telecom services and offerings.

Again, above mentioned plan is not final – however, it is very likely that these details may remain intact in the IM.

Image via APP and ET