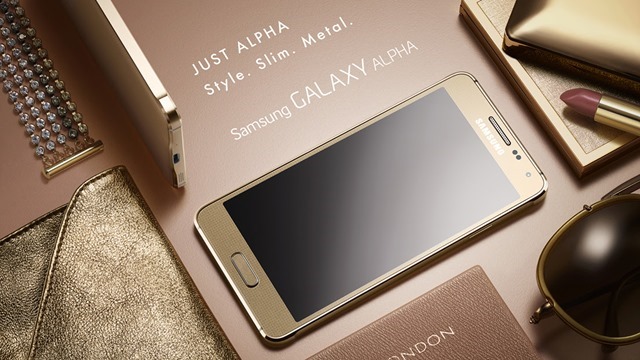 Samsung is afraid, that’s a fact. This last quarter, it recorded its worst performance in two years, mostly due to the faltering sales of its S5 flagship. It’s been just about time that people realize that gimmicks don’t really matter rather than showing off (or for point scoring).

But the worst is the design. Samsung’s phones are just about as exciting design-wise as BlackBerry’s are in terms of apps. It’s about time that it has to change its usual years-old design.

Turns out, Samsung finally has.

After months of speculation, Samsung finally uncovered the Galaxy Alpha, its first metal high-end in ages. No need to smash the hell out of your phones (or post an awkward selfie, I’m just saying!) just yet because there’s more.

The screen of Galaxy Alpha is 4.7″ with 720p HD resolution. That’s not exactly the flagship-standard for 2014 but offers a respectable pixel density of 320ppi. Apart from there, almost nothing is subpar in Galaxy Alpha.

At the back of Galaxy Alpha is a 12 megapixel camera capable of shooting 4K video at 30fps. There’s also a 2.1 megapixel lens at the front for all your selfies.

In typical Samsung fashion, no shortage of gimmicks either. With Galaxy Alpha you get a fingerprint-reader as well as a heart-rate scanner. The OS running is Android 4.4.4 KitKat, customized by Samsung further. Samsung’s S Health, Ultra Power saving mode and the wide-array of usual apps will come along too.

Galaxy Alpha will come with a rather small 1,860 mAh battery. It will be offered in four colours: Black, White, Gold, Silver and Blue. It is remarkably thin too, at just 6.7mm thin.

It’s not a complete redesign though, but a rather “evolution of the Galaxy design” as Samsung calls it. It isn’t all metal; the back-cover is still dimpled and removable, not unlike the Galaxy S5 while the phone itself now looks like an iPhone. Should turn more heads now but isn’t water-proof.

Galaxy Alpha will hit worldwide this September for an unspecified price-tag.