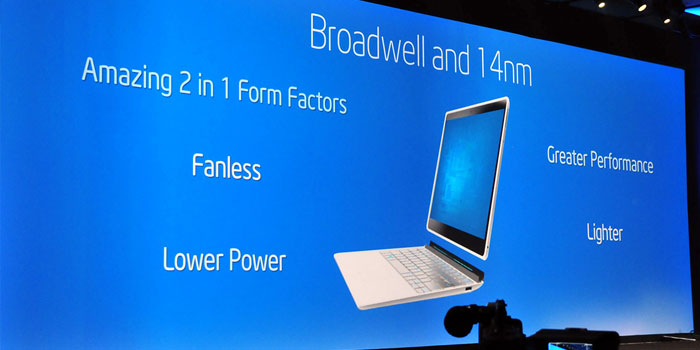 Innovation at Intel continues unabated with the announcement of its 5th Generation of Core processors, titled “Broadwell”. As compared to the 4th Generation, or “Haswell”, the updated processors boost graphics power, multitasking speed as well as giving 90 minutes of extra battery life.

Manufacturers will begin shipping devices that are powered by Broadwell by the end of January, according to Intel. 5th Generation Core i3, i5 and i7 processors will be available in laptops, 2-in-1s, Ultrabooks, Chromebooks, as well as mini PCs.

The updated technology is also expected to result in significantly thinner and lighter devices with a complete redesign of the laptop. An efficient use of energy has topped priority when it came to the design parameters of Broadwell. “These designs are the thinnest, lightest and most energy efficient notebooks, 2-in-1s, Chromebooks and Ultrabooks,” said Intel CEO Brian Krzanich, while commenting on Broadwell during a conference last week.

5th Generation Core processors have a number of other advanced features too. They will support Intel’s RealSense 3D technology, allowing manufacturers to offer gesture control, as well as 3D capture and editing capabilities. Devices featuring Broadwell will be pre-loaded with Intel’s voice assistant, allowing users to wake up machines, control apps and surf the internet through voice commands. Furthermore, there will also be a number of integrated wireless services as the company looks to promote a “cord-free” future for personal devices.

With regards to the design of the new processor, Broadwell has the same microarchitecture as its predecessor, Haswell, but with improved performance and efficiency due to a reduced chip size. Broadwell chips will have 1.3 billion transistors in a 14nm package, significantly reduced from the 22nm used by Haswell chips.

So far the announced product suite featuring Broadwell processors are the Elitebook Folio 1020 Special Edition from HP, the LaVie U from NEC, the Yoga 3 Pro from Lenovo and the ThinkPad Helix 2 also from Lenovo. However, specific launch timelines have not yet been confirmed.