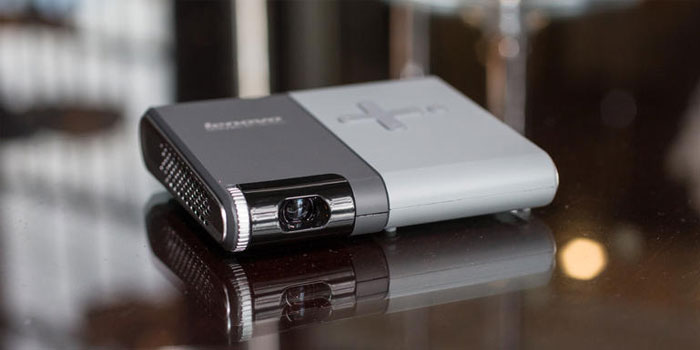 Lenovo has come up with a portable projector device that pairs up with any Android phone or tablet running Android 4.3 Jelly Bean or above, thereby allowing users to beam their media straight to the big-screen.

The device, named as the Lenovo Pocket Projector, made its first appearance at the Mobile World Congress in Barcelona. Starting from May, it will be available worldwide for the price of $249.

The smartphone accessory comes with a 50 lumens bulb that projects a display screen of up to 110 inches from corner to corner. Its native resolution is 854×480, which is nothing to write home about, particularly in comparison to standard projectors.

However, with the device’s portability being its selling point, it’s clear that certain compromises have been made. It supports both standard 4:3 and widescreen 16:10 aspect ratios. In order to help get the best viewing angles, the angle of projection can also be altered by up to 90 degrees via a rotatable projector part.

In terms of connectivity, media can be sent from a phone to the Pocket Projector via microUSB, or wirelessly via DLNA and Miracast. The microUSB is also used to charge the device’s battery, which can last for up to 2.5 hours on a single charge. A 0.5W dual speaker setup is arranged at the left and right sides of the device, making it capable of outputting stereo sound.

There’s also an optional 3.5 mm jack for occasions where better sound equipment is available. It also features a microSD card slot for locally storing media, with support for cards with a capacity of up to 32GB.

The Pocket Projector measures at 104mm by 25mm by 100mm and weighs 170 grams, making it considerably smaller and lighter than the standard projector. Moreover, its ergonomic design makes it easy to carry and handle.

However, the device is not exactly true to its name; that is, it probably won’t be an easy fit in the pocket. That said, it still serves as a handy presentation tool for the business world. Given the price tag, that’s probably the market Lenovo intends to target.