Three month long SIM re-verification drive from cellular companies, that cost them over US 60 million dollars, is becoming shady as the results are too confusing to digest.

At the end of deadline (which was set as April 12th, 2015) all un-verified SIMs were suppose to get blocked.

This essentially means that after April 13th, 2015, every single SIM operating in the country had to be either verified by biometric re-verification system or it had to be postpaid/corporate subscription.

However, the results — which are yet not made public by Pakistan Telecommunication Authority — are only raising more questions about the credibility of re-verification drive.

Keep reading to know the facts

Before we go ahead, here are some background facts at the starting of re-verification drive

So technically speaking, Pakistan’s total mobile subscribers — before the start of re-verification drive — stood at:

Hence, telcos had these 109 million SIMs on January 12th, 2015 when biometric re-verification started.

But both of these possibilities were not met. And as per Dr. Ismail Shah, the total count of SIMs in Pakistan (as of last weekend) stood around 120 million. He told this during a workshop held in Islamabad this weekend. Here’s the link for coverage of the said workshop.

Cellular companies explain that they made new sales during three months (Jan-April 2014), while dormant SIMs (that were blocked in December 2014) went active and hence the count for SIMs increased.

Not to mention, sale of new SIMs was banned on retail outlets and just customer service centres were allowed to sell new SIMs.

Re-verification data provided by mobile phone companies do not reconcile

So mathematically speaking cellular companies managed to grab over 30 million of new sales and/or re-activation of dormant subscriptions.

Yes, its all confusing and even PTA admits that results are not reconciling.

If all un-verified SIMs are blocked — then how come illegal voice exchanges are still operating in full swing?

We know that illegal voice exchanges use hundreds of SIMs per exchange and those SIMs are impossible to get re-verified. Hence they were suppose to get blocked after the deadline — putting an end to illegal exchanges.

However, that’s not the case. PTA and FIA in-fact raided two exchanges just past week. Below is scree-grab of the official PR on the raid: 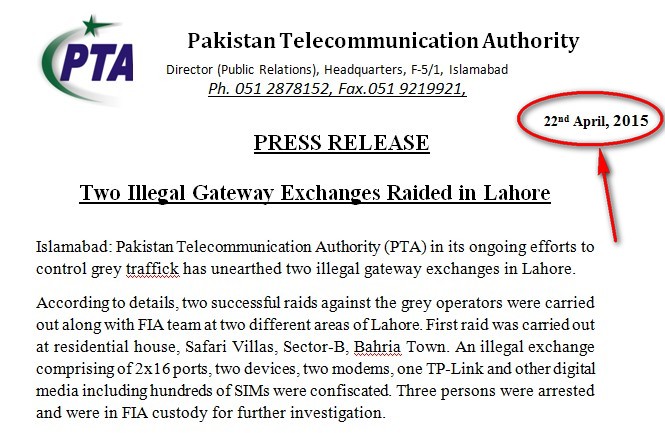 ProPakistani has details of few numbers that were never verified by their users but those un-verified numbers are still operating normally, even after the deadline.

It merits mentioning here that all these numbers (that are un-verified but still active) are extremely high revenue generating SIMs.

Not all un-verified SIMs were Blocked

Similarly, in such a case, those fraudsters that send fake lottery SMS or Benazir Income Support messages are going to live forever.

Telecom companies, when asked about the issue, said that all un-verified SIMs are blocked. They said that data of verified and blocked SIMs has been shared with PTA and only PTA will make these stats public.

Apparently they didn’t know anything further.

PTA thinks that the matter of un-verified SIMs need a proper conclusion. It said that they want to make sure that this whole issue is never revived again and for this they want Ministry of Interior to audit the data along with PTA officials.

PTA said that this audit report will settle all doubts and that no one should worry about any in-appropriations.

It won’t be out of place to mention here that audit team is yet not formed — even after 15 days of completion of re-verification drive.

Unless you live under a rock, you must be familiar that all cellular networks are operated with computers. And they take just few clicks in blocking (millions of) SIMs, re-activating them or counting them all.

If so, then why such delays in announcing the re-verification results?

Then why it is now taking them forever to announce the results?

We just hope that millions of dollars and countless work hours of Pakistanis won’t just get wasted.

We just have been told that deadline for re-verification of SIMs has been extended till May 15th, 2015. This was decided during a high-level meeting chaired by Ch. Nisar, Interior Minister.

This proves that our above suspicions were just on the mark and the corporates — in hands with PTA and Ministry of Interior —  fouled the whole nation again.