Mobilink posted a positive revenue quarter with total revenues of Rs. 25.9 billion during July-Sep 2015, up 7% from the 24.2 billion it generated during the same period last year. Company said that increase in revenues was mainly driven by data revenue growth of 78% YoY and higher MFS revenue with a 61% YoY increase.

Mobilink’s MFS revenues represented 2.7% of service revenue, that are mainly attributed to successful retail promotions along with an increased active agent footprint.

The EBITDA margin increased 6 percentage points YoY to 41%, as a result of the revenue growth and cost efficiency initiatives, mainly in procurement and utilities.

Capex in 3Q15 decreased to PKR 6.7 billion as the 2G network modernization was completed in 2014. The Company continues to invest in its high-speed 3G network roll-out.

Mobilink said that it managed to verify 87% of its customers during the Biometric SIM re-verification drive and less than 1% revenue was impacted due to entire process of re-verification. Mobilink’s customer base reached 35.2 million at the end of reported quarter.

Mobilink said that its ARPU settled at Rs. 230 during the quarter, up from Rs. 195 during the same quarter last year.

Below are Mobilink’s Financial Highlights for the quarter: 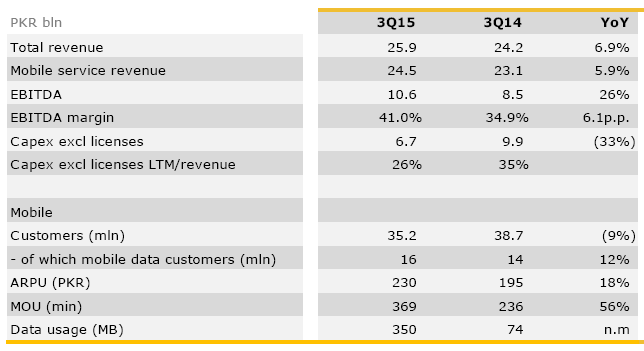 Mobilink posted a strong positive growth of 7% on its YoY revenue in 3Q15.

Recently declared as the best 3G service of Pakistan by PTA, Mobilink’s ascent was driven by a data revenue growth of 78% YoY and a higher Mobile Financial Services (MFS) YoY revenue increase of 61%.

The growth in MFS revenue which represented 2.7% of service revenue by the end of 3Q15 is a result of strategic expansion in retail footprint and promotion of MFS retailers.

Mobilink strengthened its leading market position during the third quarter, following QoQ gains in both customer and revenue market share. This growth follows Mobilink’s successful completion of the SIM re-verification process in 1H15, in which the Company managed to verify 87% of customers and secure 99% of revenue.

As a results of this process however, the customer base decreased 9% YoY to 35.2 million in 3Q15, as 5.6 million customers were blocked in 2Q15. Mobilink also showed a substantial YoY growth of 25.6% in EBITDA which can be attributed to the growth of its data and MFS segments.
Mobilink’s base saw a boost of 5% as a result of a strong segment focused approach to its customer base, an improved channel commission structure underpinned by a relentless focus on price simplicity and transparency for its customers and on delivering superior network performance.

Success of Mobilink’s strategy in 1H15 is also a result of targeted pricing strategy supported by rationalization in its products and services portfolio. Mobilink’s ongoing franchise refurbishment focused on an improved customer experience at retail level has also helped vitalize the business.

Furthermore the expansion of 3G, now covering more than 250 cities, and the introduction of digitalization on both internal and external fronts helped contribute towards the first positive growth for Mobilink in over 2 years.

Jeffrey Hedberg, President and CEO Mobilink commenting on the results said, “As we continue anticipating our customers’ needs I am confident that we will, as a team, deliver the best experience customers expect from a market leader. Mobilink’s Q3 results are reflective of the trust our customers have placed in Mobilink. We have not only maintained our market leadership position but have significantly improved our customers’ experience by providing them with world-class products and services.”