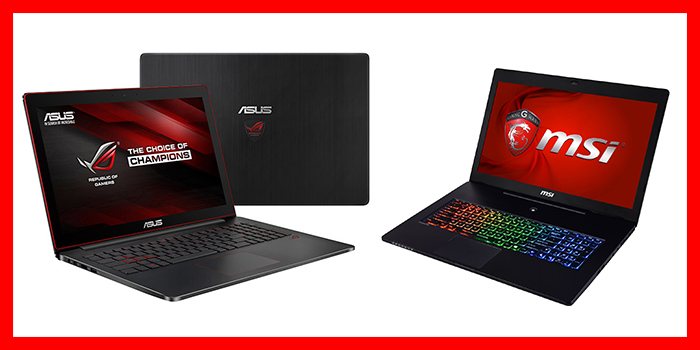 ASUS and MSI, both companies of Taiwanese origin, have been doing extremely well in catering to the needs of notebook gamers. According to the latest statistical data from DigiTimes, ASUS is expected to ship a total of 1.1 million units, while MSI will have shipped approximately 900,000 units in 2015. These statistics make up 50 percent of the estimated global shipments, which according to supply chain makers, range between 3.8-4 million units.

In addition to manufacturing gaming laptops, both ASUS and MSI also manufacture desktop computer peripherals ranging from motherboards, graphic adapters, and several others. ASUS has also targeted the smartphone and tablet market, a market which MSI is yet to penetrate. While ASUS and MSI hold 50 percent of the market share for gaming notebooks, Dell is at 3rd place, with a total shipment tally reaching 100,000 units for 2015, while other companies such as Acer, Lenovo, HP, Razer, Gigabyte Technology and Haier sharing the remainder number of units shipped.

Despite the fact that the aforesaid companies did not manage to fare well this year, competition is going to heat up in 2016 as all companies will be squaring off to increase sales as much as possible, which also means that we can expect cheaper priced gaming notebooks to appear next year thanks to this competition.

Lenovo has teamed up with Razer, a popular peripheral manufacturing company in order to promote dual-brand products, while Haier has recently enhanced the portfolio of its Thunderbolt series’ gaming products. At the same time, ASUS will continue to inject a hefty amount of capital in order to develop gaming notebooks, with the source indicating that more models will be incoming.

Despite the fact that the PC market is not doing well, global shipments of gaming notebooks are expected to increase to 4.5-5 million units in 2016. This means that the companies mentioned here will have to up their game if they are to attract new gamers to opt for their products in 2016.