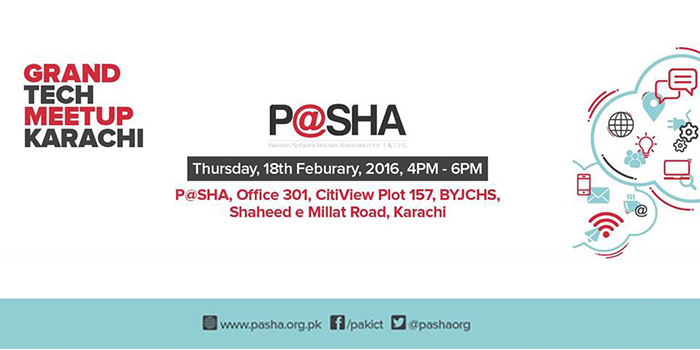 Previous two events in the series were held in Islamabad and Lahore, while the fourth meeting will be organized in Peshawar.

The event was part of an ongoing series to unite top tech executives in the industry with young and emerging startups to collectively address the issues that the industry is facing. The objective is to promote diversity in technology and innovation and collaborate with the Government to address impediments to growth, such as quality human capital, infrastructure and taxation related issues, that are being faced by individuals as well as companies in the IT sector.

“The IT industry can address two of Pakistan’s major issues; creation of almost 300,000 new white collar jobs for the youth, and an export jump to reach 5 billion US dollars per year by 2020,” said Syed Ahmad.

According to Syed, [email protected] will be spearheading the Digital Pakistan 2020 campaign in collaboration with key stakeholders in the industry. However, support and strength of IT companies in big numbers would be needed to create a major impact and get quantitative results in this regard.

He elaborated that [email protected] is also in the process of creating separate community platforms for freelancers and startups in Pakistan, where they will be able to find information and advice on how to take their ventures forward. They will also be able to get their queries answered through an official platform and voice their concerns related to issues like payments, taxation etc.

The Pakistan Software Houses Association for IT & ITES ([email protected]) is the trade association representing the IT and IT Enabled Services sector. It aims to continue being the voice of the IT sector by providing platforms that are geared towards creating more opportunities for members of the ecosystem both domestically and internationally, create a collaborative sphere and arrange workshops and trainings aimed to enhance the quality of startups and freelancers.

Impressions from the Event

Many dignitaries and tech professionals were in attendance at the event in Karachi. Given Pakistan’s potential in IT, many of the attendees were of the view that official support and lack of education about IT amongst the decision makers at the provincial level was a serious matter that had to be tackled as well. For a country’s IT sector to flourish, there was a need to induct professionals who understand the ebbs and flows of the global, and more crucially, the local technological landscape at both the provincial and federal levels.

Even though the event focused on answering the queries of tech companies with regards to various taxation, political, technological and infrastructural issues that were unique to the Pak IT sector, a query was raised from one of the attendees about what [email protected] can do to better serve the interest of freelancers. Freelancers from Pakistan are another focus area for [email protected], given how instrumental they’ve grown in bringing invaluable foreign exchange into Pakistan.

All in all, [email protected] has taken a step in the right direction, setting off a debate about the need for Pakistani tech companies to come together and represent the interests of a vital component of 21st century Pakistan.