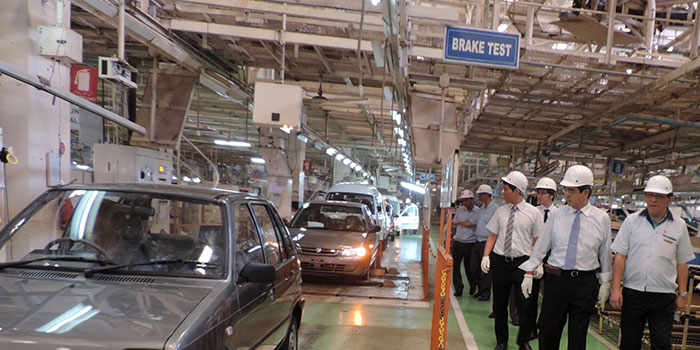 Punjab Rozgar Taxi Scheme has resulted in 203% more profit for Pak Suzuki in 2015 as compared to the corresponding period of 2014.

According to official results announced by the company recently, the overall profit of the company increased to Rs 5.842 billion in 2015 as compared to Rs1.9218 billion in 2014, thanks to PML-N Punjab government.  The profit reflected record sales from the company, mainly from passenger cars and motorbikes.

The automobile company sales generated revenues of Rs 2.84 billion for the national exchequer on the account of different taxes.

The company has sold the maximum number of vehicles including Suzuki Ravi, Suzuki Bolan, under Punjab Taxi Scheme which saw a record sale in 2015. The sale of Mehran was significant despite being one of the old models in Pakistan.

Market players, especially Indus Motor Company Limited (Toyota) and Honda Company Limited, are not happy with the provincial government of Punjab. There was a lack of a level-playing field and the government simply selected Suzuki company for the scheme without holding any due process by floating Expression of Interest (EoI) and subsequent bidding process.

One of the simple reasons why Suzuki was selected many times has to do with the availability of models — Suzuki Ravi and Suzuki Bolan– that no one among the competitors would manufacture locally as per the requirements of the beneficiaries.

But officials of these companies do not agree with this argument. They said on the condition of anonymity that such schemes are huge and any company can have  the capacity to meet these orders with the current available technology and manufacturing plants.

Experts of automobile industry also said that car models of Suzuki are less preferred over different variants of Honda and Toyota which are comparatively high-tech and durable.

If the provincial government of Punjab distributes quotes to these three automobile companies equally, it could have benefited from a competitive bidding process.

Why Rozgar Scheme Only in Punjab?

Rozgar or Green Taxi scheme has been initiated in Punjab by the provincial government but why hasn’t it been launched throughout the country by federal government?

The Yellow Cab Taxi scheme, which was introduced by PML (N) government in 1990’s in major cities, could be launched again by Federal Government countrywide. It is hoped that the Rozgar Scheme adopts the same path as the Laptop scheme, that rolled out in Punjab first and was replicated in rest of the provinces for university level students later on.

In order to meet the requirement of Taxi Scheme, Pak Suzuki has hired hundreds of skilled workers on contractual basis which were laid off by the time the scheme ended in February 2016.