Huawei’s P9 duo of flagship Smartphones have been in the rumor mill for a long time and their phone specifications have leaked on several occasions as well. Today, the Chinese tech giant has put the rumors to rest by announcing its flagship duo dubbed P9 and P9 Plus, both of which were unveiled at the launch ceremony held in London, UK.

Huawei P9, as the lack of a suffix suggests, is a normal-sized flagship. The P9 comes with an IPS LCD screen of 5.2-inches that’s backlit by 20 LEDs. Since Huawei has made it clear that 2K and higher resolutions are of no use in normal sized phones, the resolution still stands at 1080p on the P9. The company was keen to point out that its flagship has the pretty much the same dimensions as an iPhone 6s but still has a higher-res and bigger screen.

The flagship is built using a high quality aluminum alloy and resembles the looks of the recent Huawei-made Nexus 6P. The dark camera strip on the back is another reminder of the Nexus phablet. A fingerprint sensor has also been placed on the back of the device. This time it offers improved speeds and doubles as a multi-purpose button.

Huawei’s P9 is powered by its own Kirin 955 chipset, an upgraded version of the Kirin 950. The processing chip utilises 8 cores with four Cortex-A72 ones clocked at 2.5GHz while the power saving Cortex-A53 cores are clocked at 1.8GHz. There will be two versions of the device, one will come with 3GB RAM and 32GB storage while the other one will make use of 4GB RAM and 64GB on-board storage. SD storage is handled by a hybrid card slot that also uses the second SIM slot.

We finally come down to the killer feature of the P9 series, a dual camera developed in collaboration with German Optics specialist Leica. The P9’s rear consists of two 12MP cameras, one capturing colour while the other one only sees black and white. While working in unison, they give far more detailed shots in good light while helping reduce noise during low light scenes. While the aperture sits at f/2.2, autofocus is handled by a combination of laser, contrast and depth calculation algorithms. There is a dual-LED flash like the predecessor, but the Optical Image Stabilization (OIS) is no more, possibly because a dual-camera setup can’t utilize identical OIS mechanisms.

Finally, the device boasts a battery pack of 3,000mAh. It’s charged using a USB Type-C connector. The phone will come with Android Marshmallow 6.0 based EM UI 4.1 out of the box. Global sales start from April 16. 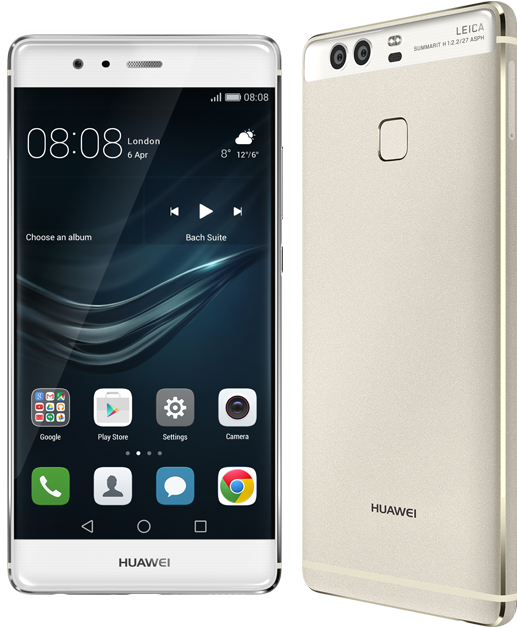 Huawei usually releases a Max version of its flagship alongside the normal variant. However, this year Huawei chose to release a Plus variant instead. Unlike the Max version which was over 6 inches in size, the Plus variant has a screen size of 5.5-inches. A Max variant may still be on the cards, but the current show belongs to the P9 Plus.

As far as the build is concerned, the P9 Plus comes with the same aluminum unibody design as its younger sibling. Since the screen size is the same as an iPhone 6s, P9 Plus is 5.9mm shorter and 2.6mm narrower than its competitor from Apple. The screen resolution is the same while the tech gets a switch to AMOLED display.

The fingerprint reader is still present however, and the P9 Plus adds pressure sensitivity on top of the regular P9. Just like the Mate S and its Force Touch, the P9 Plus makes use of a pressure sensor and the knuckle touch features. The tech is called Press Touch in P9 Plus.

The processing package and the camera setup are the same on both the P9 and the P9 Plus. However, unlike the regular one, P9 Plus is available in a 4GB/64GB configuration. With the bigger screen size comes an increased battery capacity of 3,400mAh. The USB Type-C connector supports Dual-IC Rapid Charge providing the user with 6 hours of talk time after a 10-minute charge.

In addition to that, the P9 Plus has a dual speaker setup. Huawei says that the phone can adjust its output depending on the phone’s orientation. When the phone is held in landscape mode, the speakers work normally, however, when the phone is in portrait mode, bass is handled by the bottom speaker while the top one manages the treble.

The rest of the specs and features remain the same on both the P9 and P9 Plus. The P9 Plus will go on sale after 20th May 2016. 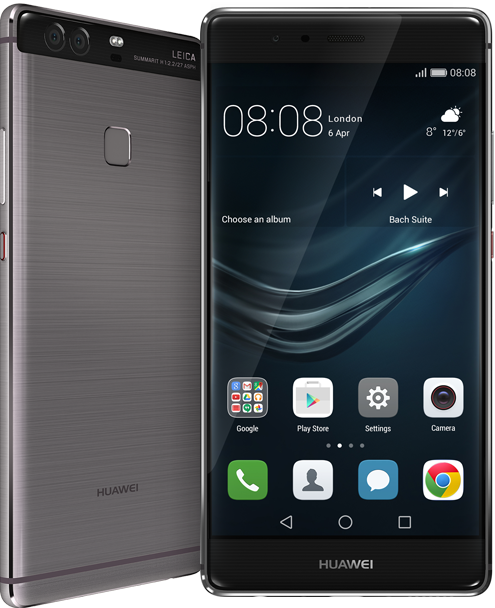