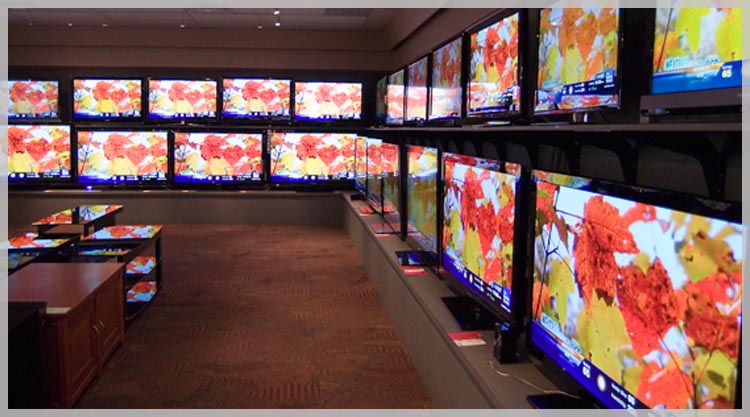 In recent times, we have heard a lot of terms go around when we talk about screen technologies. We’ve heard about overwhelming array of acronyms like CRTs, LCDs, then LEDs, followed by some Plasma and OLED technologies. They have just got too many technologies and there’s no proper explanation, just some marketing mumbo jumbo.

We decided to guide our readers on what each of the screen technologies holds and its benefits over the other technologies. CRTs and plain LCDs have almost become extinct but we will still explain since there are a lot of used products still being sold in Pakistan.

It worked by using a projector gun which fires electrons to the display exciting particles and creating images.

CTR based old TVs and monitors were bulky. They are large in size, consume a lot of electricity and only come in old screen aspect ratios (not widescreen). While CRTs support a number of resolutions, this technology could not display great detail.

LCDs are thin and are normally used in monitors, laptops and portable devices.  This technology utilises a liquid crystal and a flat panel, which can block light. The whole panel is made up of multiple liquid crystal segments. These blocks vary their transparency and colour as input current is varied.

As for the non-technical details, LCDs use fluorescent backlights like bulbs to illuminate the displays, making them one of the brightest display technology. Some of the technology’s drawbacks were contrast shifts, brightness issues, colour shifts as the user’s viewing angle changes.

In reality, there are no LED TVs. It’s just a marketing lie. LED TVs are actually LED-backlit LCD TVs. There’s no other change in technology. The difference you see in display quality is because of the improvements in software and the advantages that LED backlighting brings.

LED-backlit LCD screens offer greater contrast, local dimming, better colour brightness and overall brightness. Another plus is the energy saving this technology brings. Users get up to 70% power saving over conventional technologies.

To clarify, there are actually two types of LED-backlit TVs. One types comes with Direct LED backlighting which brings superior image quality. The other one is Edge-lit LED, which means having LEDs at the edges of the display. Edge-lit LEDs have fewer lights, hence lesser control over the brightness and contrast resulting in an inferior display quality compared to Direct LED screens.

Plasma screens are made of 2 sheets of glass with some gases (in plasma form) in between those. The name of the screen technology is derived from the plasma material used. The plasma is charged with electricity resulting in the picture we get. Plasma powered devices don’t require backlighting and electric reactions provide the lighting.

In terms of picture quality, plasma is superior to LCD and LED technologies. It offers better contrast (nearly infinite) and colour accuracy. However, since the technology is difficult to manufacture for small screens, it is only used in large screen TVs. Plasmas are cheaper compared to the latest LED TVs. As sizes increase, plasma screens become more feasible, hence used in a few 100+ inch TVs.

Unlike LED screens, OLED is not a marketing name. It is the biggest leap in display technology in decades. It uses organics materials like carbon to create light when current is supplied. OLED don’t require any backlights as each individual pixel lights up independently, resulting in true infinite contrast and unmatched colour saturation. If there isn’t a requirement to add some backlighting, OLEDs can be ultra slim (in millimetres).

OLEDs bring another feature to the table, curved screens. OLEDs which us plastic instead of glass can be curved and flexed. In terms of picture quality (when you don’t consider the price) OLED tops the charts.

In short, OLEDs are slimmer, flexible, have infinite contrast and deeper colours. They aren’t cheap yet, but with time expect OLEDs to replace LEDs and LCDs. An iteration of OLEDs, AMOLEDs are often used in Smartphones while POLEDs are used in smartwatches.