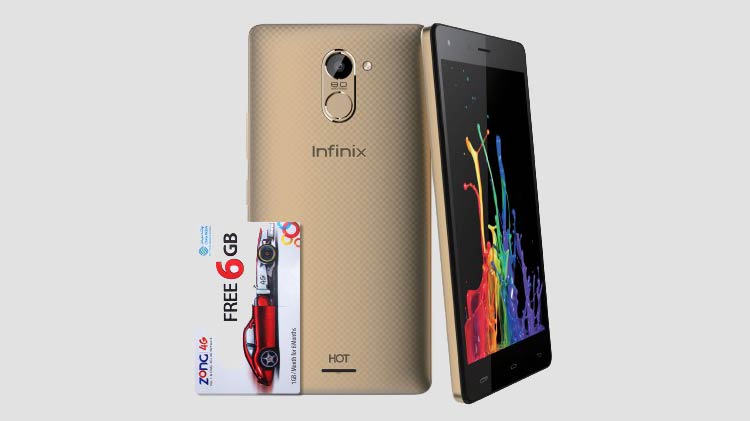 Infinix has established itself as a key player in the Pakistani market. Most of their phones are cheaper than the the competition but still provide ample bang for buck.

This time, for their newest release, Infinix partnered with Yayvo to launch the Infinix Hot 4 in Pakistan.

Infinix and Yayvo said that with Infinix Hot 4 they are hoping to target the younger demographic of the country that is mainly interested in latest smartphones.

Alongside added specs, the Infinix Hot 4 carries on the tradition of its predecessor Infinix Hot 3.

The Infinix Hot 4 is the successor to the HOT 3. The new Infinix Hot 4 now comes with a fingerprint scanner mounted right under the camera module on the back.

The battery capacity has also been bumped to whopping 4,000mAh with a promise of two days of battery life.

The screen size remains the same at 5.5-inch as its predecessor. The new Infinix Hot 4 phone also comes with Android Marshmallow out of the box and latest version of XOS on top of it.

XOS promises to decrease the power consumption by at least 30%.

A fingerprint scanner, which seems to be the norm nowadays, has now also arrived on the Infinix Hot 4.

Infinix Hot S was the first phone by Infinix to feature a fingerprint scanner and that tradition seems to have carried over and is here to stay.

A fingerprint scanner is a good addition so that you don’t have to deal with complicated passwords and it provides more secure unlocking and enables privacy controls in various other applications.

Infinix HOT 4 is available on Yayvo.com for a price tag of Rs. 12,599. You have the option to buy either a Gold color or Black color variant of the HOT 4 from here.

Yayvo is also pushing their 120 minute delivery with TCS Hazir for the Infinix Hot 4 that allows for a two hour doorstep delivery service for customers in Karachi, Lahore, Islamabad and Rawalpindi.

Delivery will start from 3rd September 2016

All Infinix Hot 4 Devices, ordered from Yayvo, will come with six months of 3G/4G from Zong absolutely free.