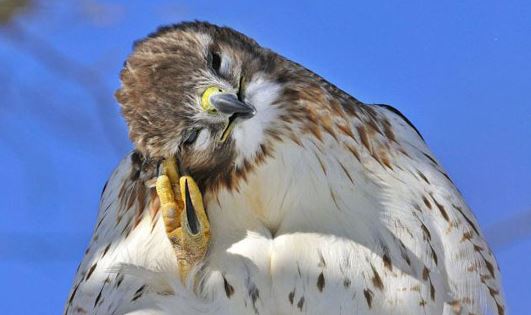 The Indian Border Security Force (BSF) has reportedly detained a hawk on account of “spying” for Pakistan.

The bird was caught near the border area of Anupgarh in district Baknar of Rajasthan and the Indian Forces have also accused the hawk for carrying a note.

They haven’t disclosed any details as to what fate awaits the poor bird or if it will get a fair trial.

It may very well be the last day the poor hawk will be able to spread its mighty winds and fly across the open blue sky.

India has a reputation of capturing birds allegedly sent by Pakistan for the purpose of espionage in the Indian territory.

Last year, they claimed of catching a ‘spy’ pigeon sent by the neighboring country. Just days ago, a pigeon was detained for carrying a ‘threatening message’ for Indian Prime Minister, Narendra Modi. The CID soon followed up by seizing 153 more pigeons, suspected to be Pakistani spies.

Recently escalated tensions between the two countries have reinforced the Indian efforts in capturing every Pakistani, even if it is a pigeon or a hawk.

It is about time we start equipping our birds with Google Maps and instruct them to not flap a wing in the Indian territory unless they want to become victim to some non-existent surgical strike.