The development is particularly significant, especially in KPK province, where a woman has entered the realm of what is considered a “man’s job”(bomb disposal/firefighting).

What Inspired Her Decision to Join the BDU

She joined the police force as a constable back in 2009.

A bomb blast near the sessions court occurred during her first day on the police force, an incident that motivated her to join the bomb squad. 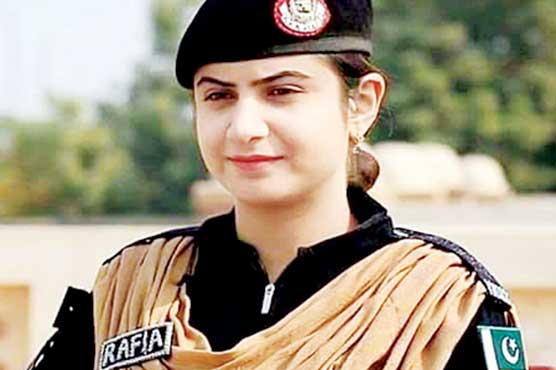 She will work in the BDU after completing her training, which will last 15 days. Ms. Rafia is taking currently taking her classes in Nowshera’s School of Explosive Handling, along with 31 male trainees.

Not Afraid to Die

She wants to send a message to the world about the bravery of the men and women of KP and says that she isn’t afraid to lose her life.

If KP’s women are so daring, imagine what level of courage male soldiers possess. It will be a matter of pride for me and my family if I sacrifice my life for the country while tackling explosives to save people’s lives.

Rafia belongs to the Peshawar district in KP. She has done Masters in Economics and International Relations. She was very happy to be the first woman to volunteer for joining the BDU.

She is currently doing her LLB from the University of Peshawar and wants to appear in the examinations.

Denied Job Offers From Abroad to Serve Her Country

She was in Matani, a place near Peshawar for several days when an operation was being carried out against terrorists in the area. Rafia’s work got her noticed by many multilateral organizations, and they were impressed with how she went on to present a positive image of Pakistan and the KPK police force in particular.

As a result, she received offers from well reputed international organizations and institutions but she denied these to serve her country.

Rafia gained fame earlier this year for singing the national song “Hamara Parcham” at the Yom-e-Shauhada event at Nishtar Hall in Peshawar.