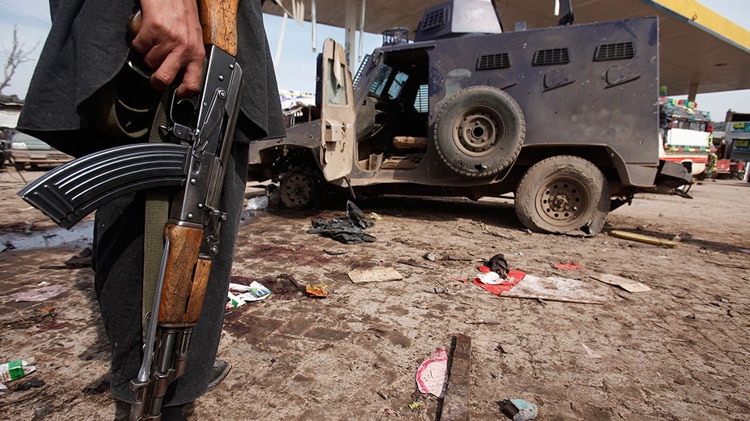 An annual report has been released by Global Terrorism Index (GTI), which analyzes the threat of terrorism around the globe.

After looking at the results of 2015, the report concluded that Pakistan is one of the five countries which are most impacted by terrorism. Other four countries are Iraq, Afghanistan, Nigeria and Syria.

Pakistan is 4th in the list of the countries which has been affected by terrorism the most, according to GTI. Iraq, Afghanistan and Nigeria are the only countries above Pakistan in that regard.

Even though Pakistan is still included in the top five, the military operations resulted in decline of terrorism in Pakistan. Over 3,000 militants were wiped out in Zarb-e-Azb operation which was carried out in mid 2014, according to the statistics.

Forming a comparison with 2014, Pakistan’s terrorist-related death count has gone down significantly.

Speaking about the decline of terrorism, Pakistan ranked third in the list. There were 677 fewer deaths in Pakistan, as a result Pakistan had the lowest number of deaths from terrorist attacks since 2008.

However, it is alarming that Pakistan reported a drop of 45 percent less terrorist attacks yet still ranks as the sixth most deadliest country.

“Although the number of attacks has fallen, terrorism in Pakistan is spreading. It has moved from the border region and is now in many other parts of the country.”

Half of the attacks are perpetrated with the use of explosives or bombs. Only 4 percent of them were reported as suicide attacks, the most deadliest of attacks.

In 2015, there were 22 suicide bombing which resulted in ten deaths per average. On the other hand, other attacks in the country averaged less than one death per attack.

GTI is a comprehensive study which analyzes the overall impact of terrorism in 163 countries. It covers 99.7 percent of the world’s population, making it the only organization credible for a general overview of terrorism.

The definition of terrorism, according to GTI is:

“The threatened or actual use of illegal force and violence by a non-state actor to attain a political, economic, religious, or social goal through fear, coercion, or intimidation.”

In order to be included as an incident in the GTD the act has to be “an intentional act of violence or threat of violence by a non-state actor”. This means an incident has to meet three criteria in order for it to be counted as a terrorist act: