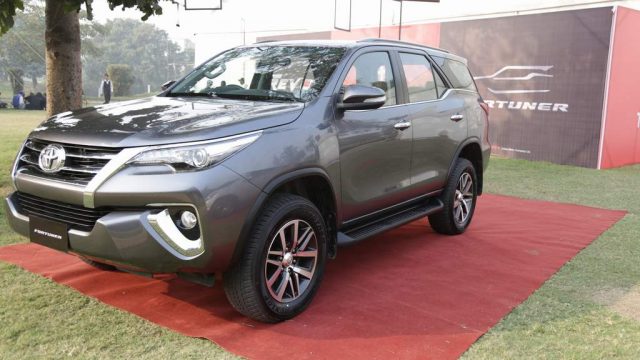 Back in September 2016, Indus Motor Company held a launch event for its upcoming Hilux Revo. However, the event showcased two new products, the Hilux Revo and also the Toyota Fortuner.

Hilux Revo was much more emphasized at that time, rather than Fortuner. Sources said that a private event will be held later in January where it will be officially along with the price tag. The Toyota Fortuner is now officially available and can be booked through any Toyota dealership around the country.

The 2017 Fortuner was an all new vehicle and was designed from the ground-up, which makes it significantly more different than its predecessor. The exterior has been totally redesigned with a more aggressive look and LED headlights, which add to the beauty of the vehicle.

Whereas the interior of the old Fortuner was a bit more like the Hilux Vigo, the new Fortuner doesn’t show any similarities. It has a character of its own. You get a much more luxurious interior with leather stitching, leather seats, dual-zone climate control, AC vents at the back, a navigation system and much more.

This is exclusive of the income tax, for which the charges according to the Federal Board of Revenue (FBR) are:

Since the Fortuner comes with one engine variant in Pakistan, the tax rates quoted above are expected to stay the same.

The booking for Fortuner can be initiated by paying 10% of the vehicle’s cost in the form of pay-order whereas the remaining amount can be submitted within 15-20 days.

Bookings for the sports utility vehicle have started and the first deliveries are expected to begin in March.