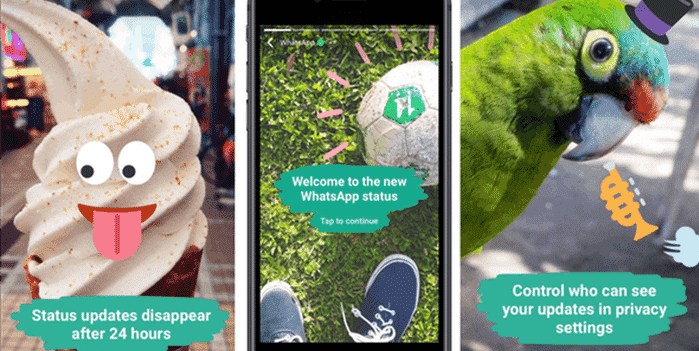 In its most recent update, WhatsApp has introduced another Snapchat-like feature. WhatsApp Status is a new tab for sharing photos, videos, and GIFs that disappear after 24 hours. Users can add emojis, doodles, and text onto the media, and send it to all their contacts, specific groups, or individuals.

After testing the feature on beta users back in November, WhatsApp is now rolling out the Status tab worldwide on Android, iOS, and Windows Phone. This new feature is end-to-end encrypted, similar to WhatsApp messaging, and hence ensures the user security WhatsApp has become famous for. This ‘reinventing’ of the Status feature has very much coincided with WhatsApp’s 8th birthday on February 24.

Facebook, which owns WhatsApp, has imitated Snapchat-like features in the past as well; it introduced Stories on Instagram, another Facebook owned service renowned for photo and video sharing. Something similar called Messenger Days is still being tested for Facebook Messenger.  It’s worth mentioning here that Facebook offered to buy Snapchat for $3 billion in 2013 – an offer that was turned down. Following that, Facebook has started copying Snapchat features into all its products.

WhatsApp CEO and co-founder, Jan Koum, has the following to say about this new feature:

“Starting today, we are rolling out an update to status, which allows you to share photos and videos with your friends and contacts on WhatsApp in an easy and secure way … Just like eight years ago when we first started WhatsApp, this new and improved status feature will let you keep your friends who use WhatsApp easily updated in a fun and simple way. From all of us at WhatsApp, we hope you enjoy it!”

WhatsApp is the most popular messaging and media sharing app around today. Each day, 50 billion messages are sent via the app, including more than 3.3 billion photos, 760 million videos, and 80 million GIFs. This also explains why the company’s focus has been on these three mediums with this new update.