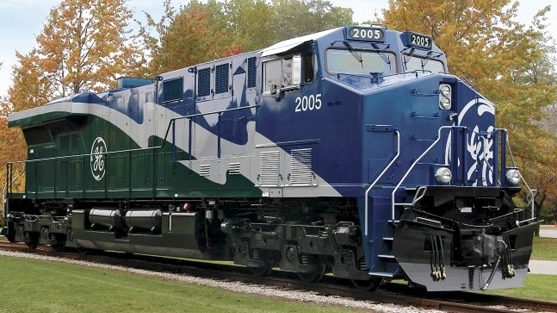 The locomotives can serve both freight and passenger cargo, and will primarily be used for transportation between Karachi and Lahore, with Peshawar and Quetta routes to be added later.

The new locomotives can also be dedicated for oil and freight supply, facilitating the business community in Faisalabad and Multan, by running a train each from these stations.

These lighter weight 2,000 horsepower locomotives are designed for better maneuverability across high gradient tracks in the country. The AC/DC locomotives possess the unique tractive effort necessary to operate in the country’s northern most landscape.

“We continue to make great strides towards reaching the transportation goal as part of the country’s Vision 2025 plan.”

“Modernizing rail transportation and improving regional connectivity are critical components of the government’s plan, and we’re confident that our relationship with GE will help achieve these goals.”

“GE’s long-standing relationship with Pakistan Railways is a testament to our reliability and innovation within the rail space,” said Sarim Sheikh, President & CEO, GE Pakistan.

Pakistan Railways and GE Transportation have maintained a successful relationship for more than four decades, and today’s announcement builds upon that commitment to further develop Pakistan’s rail infrastructure.

In 2015, GE and Pakistan Railways signed an agreement for 55 Evolutions Series Locomotives, of which 32 are already in the country. Similarly, Pakistan Railways’ agreement to purchase these lightweight locomotives further supports the Government of Pakistan’s desire to increase the share of railways in transportation from 4 percent to 20 percent within the next 10 years.