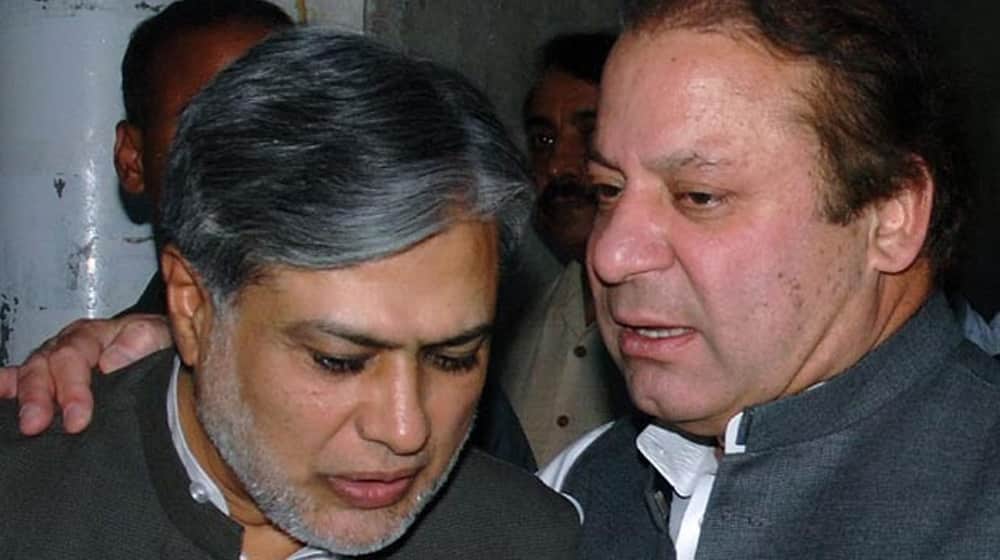 It has come to light that Ishaq Dar, like PM Nawaz Sharif, not only did he receive a work visa for Dubai but also received salaries while acting Senator in Pakistan.

From 2002 to 2008, Ishaq Dar reportedly acted as an adviser to Sheikh Mubarak al Nahyan of UAE.

During the time he was paid 82 million pounds for the services he rendered to UAE’s Minister of Culture, Youth, and Social Development, Sheikh Mubarak.

Not to mention, during exactly the same time — from 2003 to 2008 — Mr. Dar was also working for Pakistan as a lawmaker in Senate.

The objection report — that Mr. Dar submitted in Supreme Court yesterday, in response to JIT report — states that Mr. Dar was given three payments on different dates. The value of these payments were £2.5 million, £2.7 million and £2.9 million.

The report, along with their dates, are attached below:

Furthermore, it was revealed that Ishaq Dar transferred the funds back to Pakistan through Bank Alfalah branch in Lahore. The funds transferred were valued around Rs. 1 billion.

Questions arise whether a Senator can retain an advisory role during his tenure or not, given the conflict of interests in such a scenario.

Supreme Court of Pakistan received Finance Minister Ishaq Dar’s reply to to the accusations made against him in the JIT’s final report on Monday.

The Supreme Court will hear arguments from the respondents on Tuesday.

Read More: Nawaz Sharif Had a Work Visa for Dubai While He Was PM of Pakistan: JIT

In a related story, UAE government never paid $800 million for PTCL’s remaining dues and we have heard that Pakistan is writing off the payment after 10 years of non-payment.

Interestingly, Mr. Dar was employed as an adviser to a government Minister in UAE; where the government held millions of dollars of Pakistani government, but a minister of same government paid 8.2 million pounds to Ishaq Dar for advisory services.