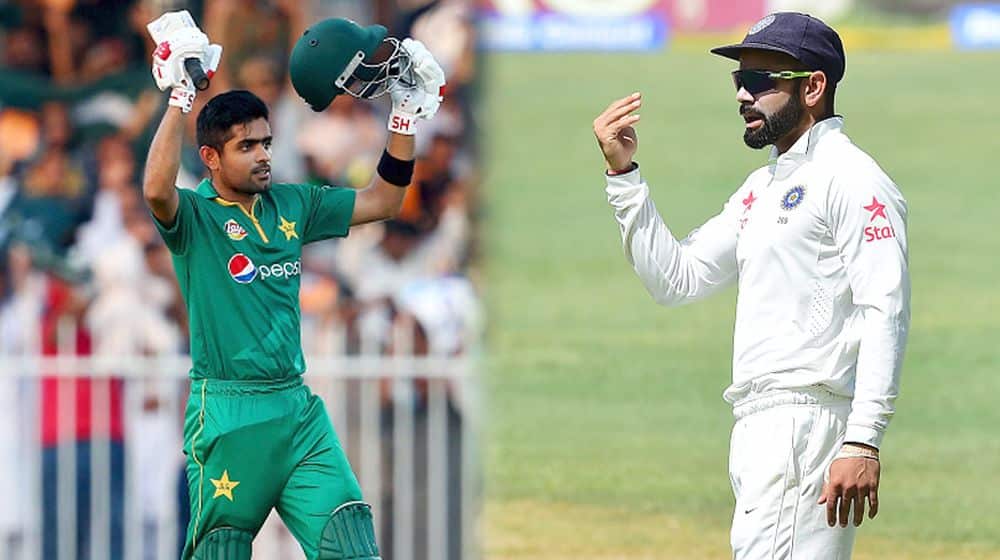 Babar Azam, after raising to several big occasions has cemented his place firmly in the Pakistani cricket side. So much that now, the young cricketer is now been compared to Indian skipper Virat Kohli, mainly due to his stylish batting and a startling batting record in this early in his career.

Babar, who is 22, is prospering by leaps and bounds which is evident from his brilliant average of 53.88 in 31 One Day Internationals.

The young masterclass from Pakistan is in the news again due to the comparisons with Kohli. In a recent Q/A session with Babar Azam on Twitter, a fan asked him that how’d he feel if he is considered the Virat Kohli of Pakistan.

What Babar Azam said was truly pleasant for the Pakistani fans.

“There is no comparison. Virat Kohli is a great batsman and I am just a beginner. But I would like to be recalled as Babar Azam of Pakistan”.

there is no comparison. @imVkohli is a great batsman and I am just a beginner. But I would like to be recalled as Babar Azam of Pakistan :) https://t.co/fqiF6ZKJ2J

Babar’s answer was almost perfect, having lauded the Indian batsman as a great and at the same time, expressing his desire to be considered as an individual in his own right.

In reply to another question, he told his favorite batsmen to be Virat Kohli, AB de Villiers, and Hashim Amla. The batsman aims to be the world number 1 batsman in the future.

This is not the first time someone has a compared the rookie batsman with the Indian Captain, which speaks of his high calibre.

He (Azam) is a young gun who will be an exceptional player. I’ll go so far as to say, at the same age, I reckon he’s as good as Virat Kohli, which I know that’s high praise but he’s right up there.

The gifted Babar Azam is a prolific run scorer, having already equalled the record for the fastest 1000 runs in ODI history in his 21st match, sharing the honors with the legendary West Indian batsman Sir Vivian Richards, Proteas batsman Quinton de Kock, the English batsmen Kevin Pietersen and Jonathan Trott.