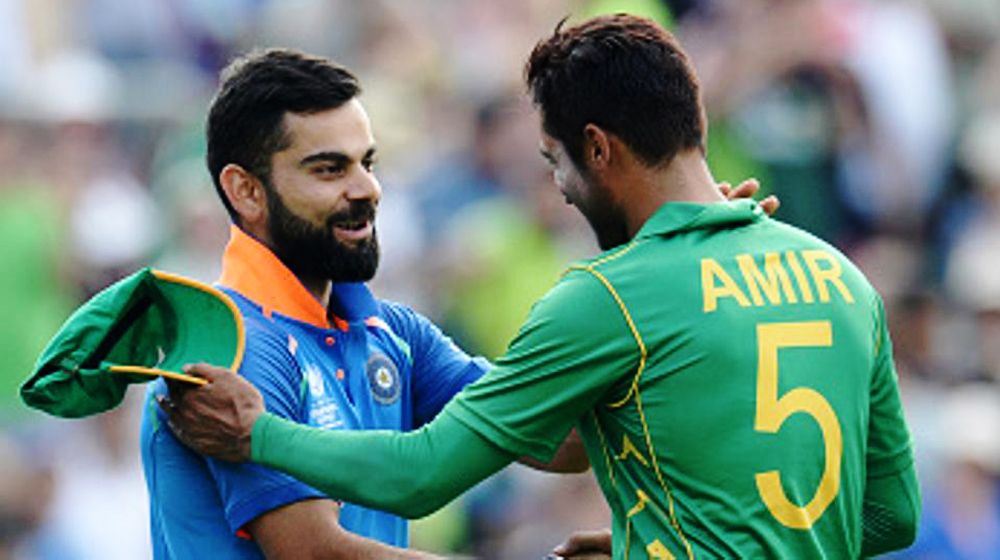 Virat Kohli has once again labeled Pakistani seamer, Mohammad Amir, as ‘one of the best bowlers he has faced’ in a chat with Bollywood superstar Aamir Khan.

The Indian skipper, when posed with the question to name a bowler who he has faced the most difficulty with, responded by saying:

In recent times, Mohammad Amir of Pakistan. He is in the top two or three bowlers in the world and the toughest bowlers I have played in my career. You have to be on your ‘A’ Game when you’re facing him or he will strike. Outstanding! Very good bowler!

This isn’t the first time Kohli has voiced his opinion about Amir and his brilliance. After Asia Cup in 2016, and ICC Champions Trophy the following year, Virat said that Amir is the key difference between Pakistan and India and no one can make an impact as big as him.

I would like to complement Mohammad Amir for the way he bowled. I actually congratulated him while he was bowling. I was so happy to play such an amazing spell. He is a world class bowler.

Kohli gifted his bat to the Pakistan seamer as well.

The respect between Kohli and Amir is mutual, however. Responding to his praise, Amir said:

Kohli’s praise made my day. It was generous of him what he said for me. It’s the sort of encouragement that you need and when it comes from a superstar like Virat, it means a lot. On the other hand, it’s a big challenge for me as well because it adds to my responsibility to prove that I am worth that praise.
Even before the match, he used some good words for me. It was very kind of him.

Mohammad Amir: One Of the Finest

Many draw Amir’s comparison with the mighty Wasim Akram, who was the first one to comment on Amir’s bowling moments after Pakistan thrashed India in the final of the Champions Trophy.

Wasim took to Twitter to announce that Amir’s spell in the final reminded him of his younger days and Amir has returned the compliment by saying that it is the biggest compliment he could have received.

Akram had earlier tweeted: “You little beauty @TheAmirOfficiaI reminded me of my days.”

Amir’s brilliance has also been appreciated by spin legend, Shane Warne, who wrote: “What a spell buddy ! Fantastic bowling……”

Ian Pont, a former English cricketer and a respected voice when it comes to the mechanics of fast bowling, has termed Mohammad Amir “one of the finest left arm prospects” as the left-arm pacer starts his long road to redemption after the 2010 spot-fixing ban.

“Amir has the potential to be just every bit as good as Wasim. And that’s because he has a far better action than Wasim had. His technique as a fast swing bowler is superior. The only thing it seems that can stop Amir is himself,” he said.