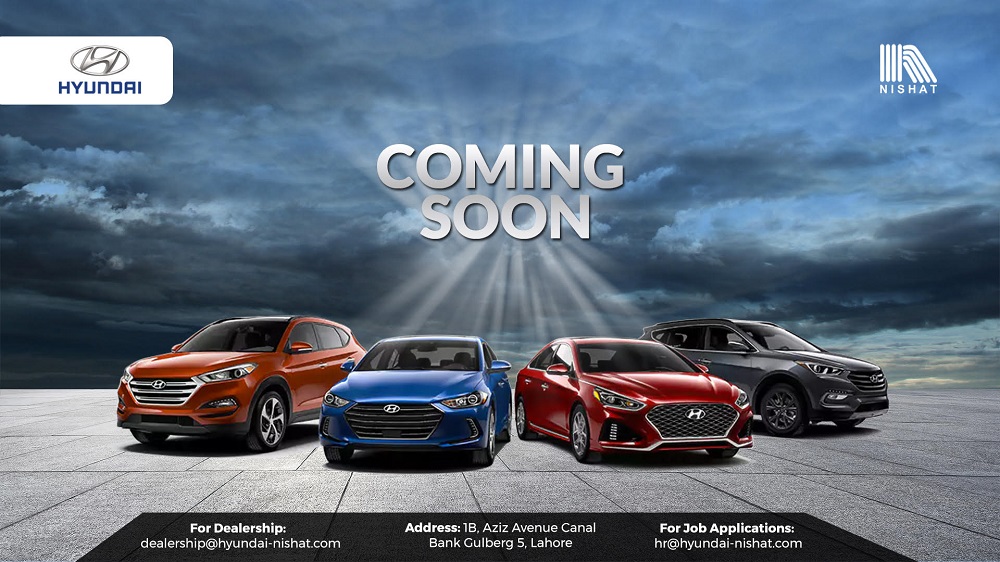 The hottest topic in Pakistan’s automobile industry is the coming soon teaser which was uploaded to the Hyundai-Nishat website.

The image shows four cars which might be introduced to Pakistan’s automobile industry. At the moment it’s only speculation because no official statement has been made by the joint-venture.

The four cars which are shown along with the “coming soon” poster on the website are:

The Nishat group is one of the biggest conglomerates in Pakistan. It has been planning to enter the automobile industry since 2012. Hyundai contacted Nishat group about starting a joint venture to introduce Hyundai vehicles in Pakistan.

The Hyundai-Nishat JV is hinting towards the automobile they might introduce in the Pakistani market which should give the car enthusiasts and prospective buyers some idea about Hyundai’s hybrid vehicles. These new cars will be assembled and launched in Pakistan by Nishat group.

The two SUVs displayed on the site are going to give tough competition to the current line of SUVs from Toyota, Honda and Suzuki.

The sedan market of Pakistan is going to be a harder market to penetrate because of the well-established Toyota Corolla and Honda Civic models.

At this point the price range of the sedans is unclear but if the Nishat group keeps the price below their competitors then it is surely going to give serious competition to the locally manufactured vehicles from Toyota, Honda and Suzuki which are cheaper but lack the quality standards we see in imported vehicles.