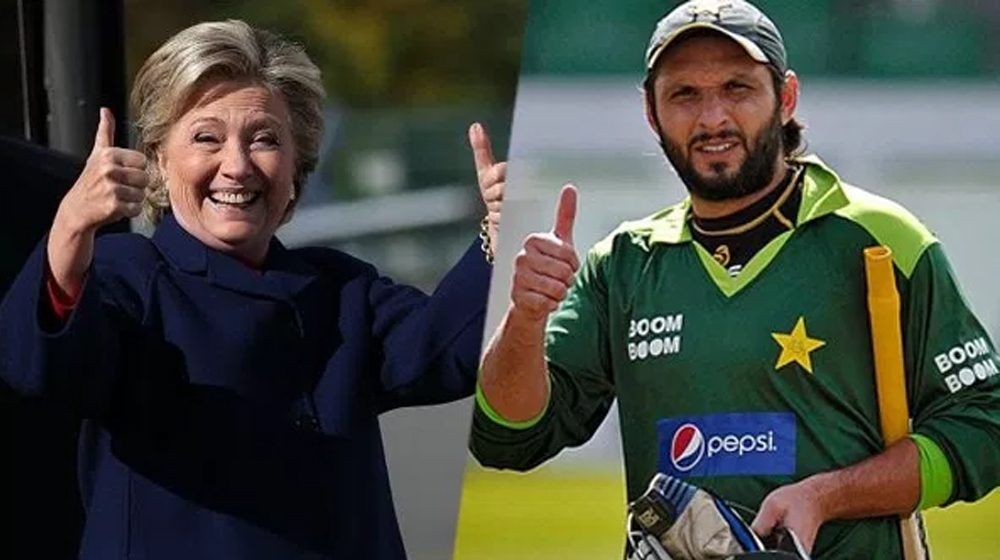 There is no denying that Shahid Afridi is one the biggest superstars Pakistan has ever produced. His fanbase is not only limited to Pakistan but to other countries as well.

His recent interaction over Twitter with a well-known politician however, drove home this fact in a more significant manner.

On Tuesday, Boom Boom sent out a tweet, thanking US politician Hilary Clinton over her support for the Shahid Afridi Foundation.

In the same tweet, Hilary Clinton’s video was featured, where she greeted the all-rounder and thanked him by saying:

Thank you for that very nice message that your friend and mine, John, delivered to me at our event today. I wish you the very best!

Thank you @HillaryClinton for supporting the cause of #Humanity and your best wishes.

In response, Afridi thanked the former First Lady of the US over her support for the Shahid Afridi Foundation and said:

Thank you Hillary Clinton for supporting the cause of humanity and your best wishes.

The former captain of Pakistan cricket team launched his charitable foundation a few years back in order to help  the the poor.

Shahid Afridi Donates Rs. 100 Million For the Construction of a Hospital

The cricketer thanked Trudeau through a social media post, saying that,

“Thank you Justin Trudeau for supporting the vision of Shahid Afridi Foundation and for your hospitality. Canada is a nation of great people. A special thanks to Islamic Relief Canada, the Pakistani and Indian community of Vancouver for your generous contribution for Kohat Hospital.”